How much do you know about our national bird, the Bald Eagle? 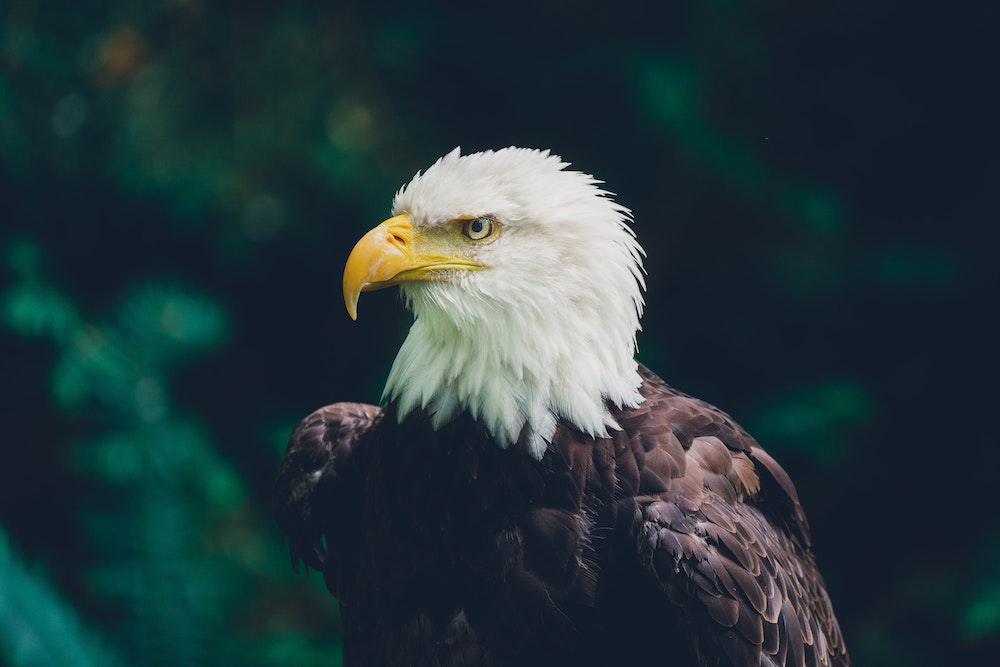 They are some of the largest birds found in North America as well. They stand between 27 and 37 inches tall with a wingspan of about 80 inches, and they weigh between 6.5 to almost 14 pounds.2

The adults have the familiar white heads with brown bodies, while their eyes, legs, and bills are yellow.2 They aren’t born with that plumage, though. The juvenile bald eagles are brown with white on their tails and along their wings. They don’t develop the traditional coloring until they’re about four or five years old.1

Bald eagles can be found near water where their prey is abundant. They set up their nests in trees, usually on cliffs. When they mate, they’ll use the same nest for years, and build it up.3 They’ll usually lay two to three eggs and the parents will share in the responsibilities.1 Babies need to be fed by the parents for the first month or so before they can start picking at food themselves.3

Sometimes they’re hunters and sometimes they’re scavengers. They’ll eat carrion, which are dead animals. Other times they’ll hunt fish out of the water or steal them from other birds. They’ll also eat snakes, turtles, and crabs.1

Bald eagles used to have much lower numbers than they do now. They faced many threats from humans in the first part of the 20th century.3 Hunting was a huge cause, as people were offered bounties by the government as they were seen as a threat to livestock. In Alaska, bounty hunters killed more than 100,000 bald eagles between 1917 and 1952.1

Eventually, the bald eagle was given federal protection and classified as endangered. Yet they still faced threats from DDT, which was a popular pesticide. When it accumulated within their bodies, it weakened the shells of the eggs they laid. This caused a decline in surviving young.1

In 1995, they moved from Endangered to Threatened. In 2007, they were finally moved off of the list of endangered and threatened species, having recovered their numbers successfully.1

Bald eagles are often considered a success story for the Endangered Species Act. What other animals do you want to see a successful recovery from?