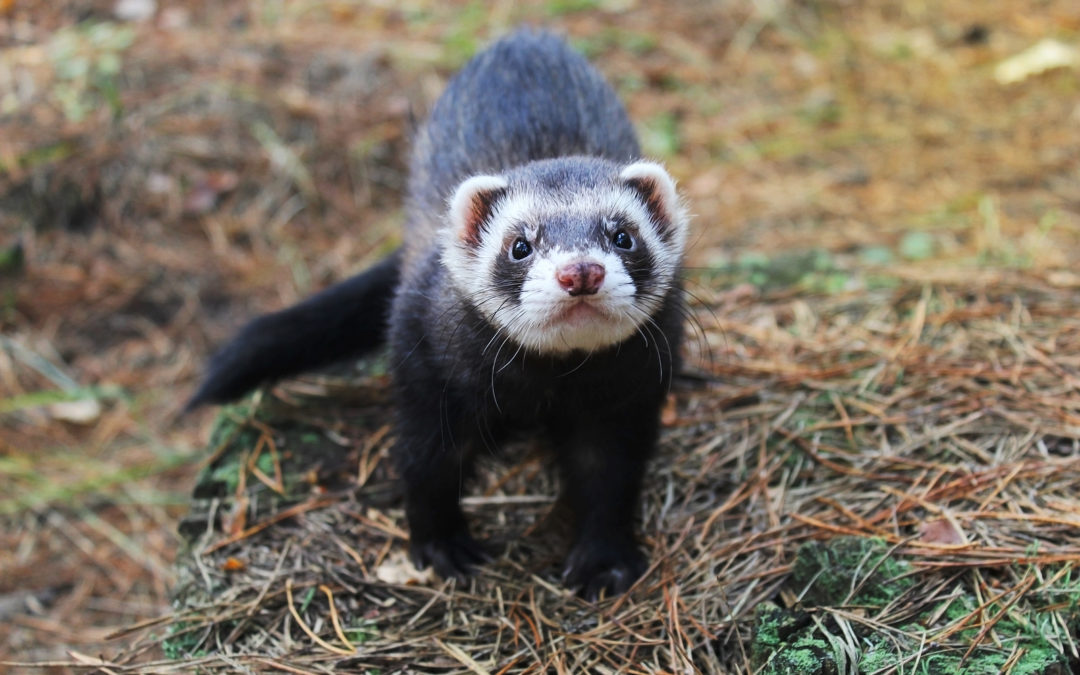 Black-footed Ferrets are nocturnal and fossorial (living underground) members of the Mustelidae family.1 They are easily recognized by their black feet, black-tipped tails, and black masks on the face, while the rest of their body is a beige-white color.2 Black-footed Ferrets are the only species of ferret that’s native to North America.3

They’re also one of the most endangered species in North America.2

They have been considered endangered since 1967, and also have been thought to be extinct twice.2 Thanks to conservation efforts between conservation organizations, Native American Tribes, federal agencies, and more, populations of Black-footed Ferrets have risen to almost 400 in the wild, with still nearly 300 in captivity for breeding.1&3 The goal is to bring their population up to 3,000.1

The greatest risks to these ferrets are habitat loss, disease, and lack of prey. Prairie dogs are a huge source of prey for these animals, but they’re also important for these ferrets to find homes. Black-footed Ferrets will use old prairie dog burrows as their own dens. When human activity like agriculture breaks up the habitats of prairie dogs or kills them off, these ferrets suffer in turn.2

Disease is also a huge threat, specifically sylvatic plague, which is the Black Death. Sylvatic plague is the term used when it occurs in other animals instead of humans. Both prairie dogs and Black-footed Ferrets are at risk of this disease, so when one species gets it, it’s easy for it to hop to the next. To help this problem, conservationists have come up with vaccine baits to help build immunity to this disease. Originally these baits were made for prairie dogs, but the benefits of prairie dog immunity to the plague help keep ferrets safe, too.1

If you agree that wildlife education is important, support us with a donation today. Our community is full of wildlife lovers that want to learn and inspire others to care about our native animals and their habitats.

Support that community and help us expand it. Anything you donate to us goes right to work to support our online classroom, our in-person outreach, and our future innovations to teach.

Thank you so much for your support, Chris,