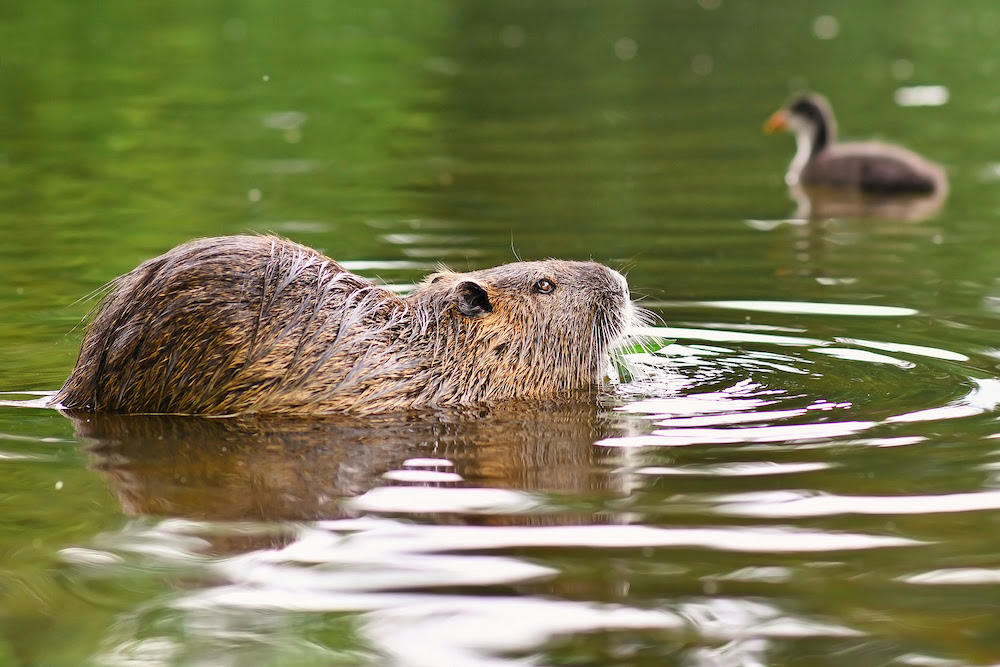 Both freshwater and saltwater marshes have long been known for their ecological importance and their frailty.  According to the US Fish and Wildlife Service, marshes only cover about 5% of the country’s landmass, yet they support 31% of our plant species.  These biodiverse areas not only absorb floodwater during storms but also help filter sentiment and organics from the water, creating cleaner waterways.  Marshes are also important nurseries for a multitude of species such as crustaceans, bivalves, birds, and fish.

Additionally, wetland areas provide crucial stop-over locations for migrating flocks of birds, allowing them to fuel up for the next stretch of their long journeys.  The ecological value of marshland is innumerable, so when a large invasive mammal threatens to destroy these critical habitats, conservationists must act quickly.

One of the largest rodents in the world, the nutria (Myocastor coypus), is native to the swamps of South America and acts as a primary consumer within their range.  This aquatic-loving rodent measures up to two feet long and can weigh up to thirty-five pounds.  They somewhat resemble a muskrat or beaver on steroids; however, the tail of nutria is round unlike the flat tail of beavers.

Both beavers and nutria prefer the same wet habitat, but instead of chewing bark like beavers, nutria eat green plants and dig up roots for food.  Their fur is highly prized by some, leading to nutria farms where they are raised specifically for their valuable pelt.

In the 1930s and 40s, several nutria farms were attempted across the United States with all of them failing for one reason or another.  Unfortunately, hurricanes and other natural disasters led to many nutria escaping from these farms and later invading the nearby marshes.  Within a few years, the noxious alien nutria began causing major destruction to marshes across the Gulf of Mexico coastline, Virginia, and even Washington.

Nutria have a year-round voracious appetite, consuming up to 25% of their body weight in native grasses each day!  This behavior not only destroys plants but destabilizes the soil by removing the roots, causing significant erosion.  Within just a few years after introduction, a population of nutria can turn a healthy marsh into open water, negating all the beneficial ecological systems of the marsh.

In the early 2000s, projects across the country began to control and hopefully eradicate the noxious rodent from our marshes.  Dogs joined the fight against nutria early on, when conservationists learned they could teach their household dogs to quickly track down nutria and keep them in one location until the handler arrived to remove the large rodent.  It became obvious dogs could navigate the tall, dense vegetation of marshes while following the scent of nutria much faster than humans could by sight.  Then, as the eradication projects became successful and the invaders became scarce, nutria individuals could no longer be effectively scent-detected, so researchers began teaching conservation canines to detect nutria scat.  This method allowed managers to determine common nutria hangouts, where they could set traps to capture the nuisance rodents.

Recently, several projects are reporting great success in completely removing nutria from the landscape.  Dogs had a large paw in this progress by initially hunting down individuals, then assisting researchers to find the best locations for traps.  Just another example of how trained canines can greatly boost our conservation practices.  By protecting our marshes from alien invaders, conservation canines are essentially protecting us from ecological disaster.

Thanks to the dogs who are keeping our marshes healthy!