How do dogs help with bear conservation? 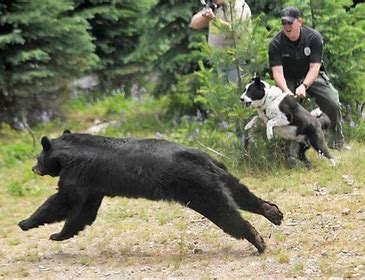 Biologists and wildlife managers now commonly use dogs to assist in finding, repelling, and relocating bears.  In fact, one breed in particular—the Karelian Bear Dog has become notorious for its courage and tenacity in moving bears.  Originally bred in Finland for hunting both small and large game, these medium-sized canines earned their name for their skill and willingness to chase and corner bears.  Although one dog with a handler may be successful, Karelian Bear Dogs are most effective when used in small groups where they surround the target animal and keep it at bay until the handler arrives. 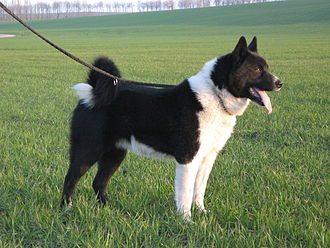 Karelian Bear Dogs can be used to safely hunt down Black, Grizzly, and even Polar Bears to place radio collars for research or monitor problem bears.  They are also used to assist in capturing and relocating habituated bears that become a danger to people.  Handlers then use the dogs to create a negative experience for the problem bear without causing injury as it leaves the transport crate in its new location.  This ensures the bear runs away quickly, keeping the biologists safe.

Japan has even used resident Karelian Bear Dogs to safeguard communities within black bear country, decreasing human and bear interactions by 98% over ten years in some areas.  The bears quickly learn to avoid human habitation due to the harassment caused by KBDs.

Although known to be incredibly loyal to their owners/handlers, Karelian Bear Dogs do not make the best household pets due to their intense territorial behaviors, which can cause aggression toward unknown humans and other animals.

Wildlife agencies across the Northwest are now increasingly incorporating these highly effective working dogs into their bear conservation programs to reduce morbidity and mortality of bears while increasing research and relocation success.