How do dogs help with blunt-nosed leopard lizard conservation? 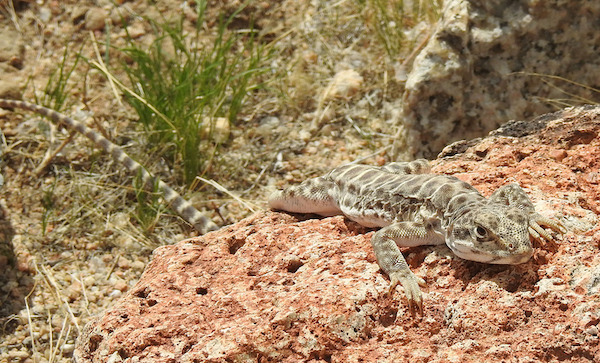 A large lizard species hangs on for survival among the often-sizzling desert and shrublands in San Joaquin Valley of California.  In addition to the usual threats of expanding human development and pollution, these endangered reptiles are also facing significant challenges caused by climate warming.

Protected by both Federal and California Endangered Species Acts, the smaller relative of the iguana is on a steady decline toward extinction.  Conservationists are scrambling to learn more about their ecology and critical habitat in efforts to protect the dwindling population.  Conservation detection dogs have recently joined biologists to help locate and protect the elusive blunt-nosed leopard lizard (Gambelia silus). 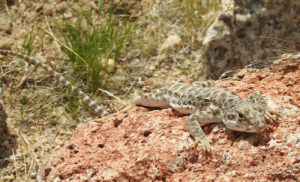 The blunt-nosed leopard lizard is an important carnivore in the arid Central California ecosystem, but 85% of suitable habitat has been destroyed leaving the species in danger of extinction.

Once believed to roam most of the Southern California interior lowlands, the blunt-nosed leopard lizard now only exists within the San Joaquin Valley scrublands.  Measuring 3.5-4.5 inches long and weighing up to 1.5 ounces, this collared lizard is relatively large for North America.  A voracious insectivore, the blunt-nosed leopard lizard controls the grasshopper, wasp, and beetle populations of the desert landscape.  It will occasionally eat smaller lizards as well, using a leaping span of two feet to easily capture its chosen prey.

When not hunting, the lizards seek shelter from the sun and predators by entering subterranean burrows made by ground squirrels or kangaroo mice.  Studies have shown the lizards are only active above ground when the surface soil temperature is between 72-97 F, which greatly complicates monitoring them for management.

Destruction of their habitat caused by human development, off-road recreation, and agricultural practices is the leading threat to blunt-nosed leopard lizards.  Invasive weeds have complicated their restoration, as well.  Plus, new research conducted by Cal Poly proved the lizards have less time each day to be active due to escalating temperatures caused by climate change.  The average temperature of the San Joaquin Valley has risen some 6 degrees over the past 27 years, which forces lizards to seek shelter more than in the past, decreasing time for hunting and therefore hindering their survival. 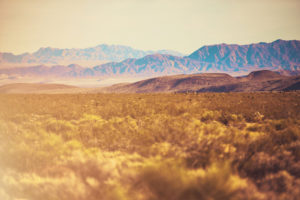 The San Joaquin Valley warming trend has added to all the stresses upon blunt-nosed leopard lizards, making restoration even more challenging.

The presence of creosote bushes and other shrubbery is important for leopard lizard survival, both for shade and hiding from prey or predators.  Conservation efforts concentrate on habitat preservation, however not much is known of the population distribution or what areas constitute critical habitat.  The main reason for this lack of knowledge is the difficultly of locating the lizards—this is where conservation canines can help save the species.

Traditional field techniques for locating blunt-nosed leopards entailed technicians scouring the desert during the few (hot) hours of daily lizard activity in a hope of catching a glimpse before they retreat under shrubs or underground.  This lengthy method was not only difficult due to extreme heat but was often inaccurate and unreliable.  As with many other endangered species, dogs can be trained to detect subtle odors associated with the elusive lizard.  In this case, lizard feces, which can then be collected and analyzed for DNA, painting a picture of the population demographics.  In addition to obtaining accurate population numbers, this method also provides great insight into the diet and ecology of the endangered reptile.  The search with canines can also be conducted while most lizards are safely within their burrows, decreasing the impact of the survey upon the sensitive species. 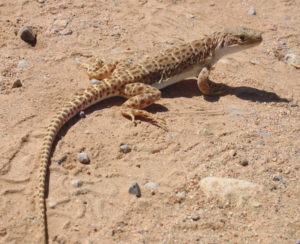 Conservation canines are leading the way in improving population monitoring and ecological studies of the endangered blunt-nosed leopard lizard.

The last time Canines Assisting Conservation ventured into the desert, we examined how dogs were boosting up conservation efforts of Mojave Desert tortoise.  Once again, our canine friends are helping an imperiled desert reptile by locating them better than any human attempt, then providing scientists with invaluable data on their lives through the analysis of their less than 2 cm scat!  The California desert benefits again from the conservation work of canines!