How do dogs help with greater sage grouse conservation? 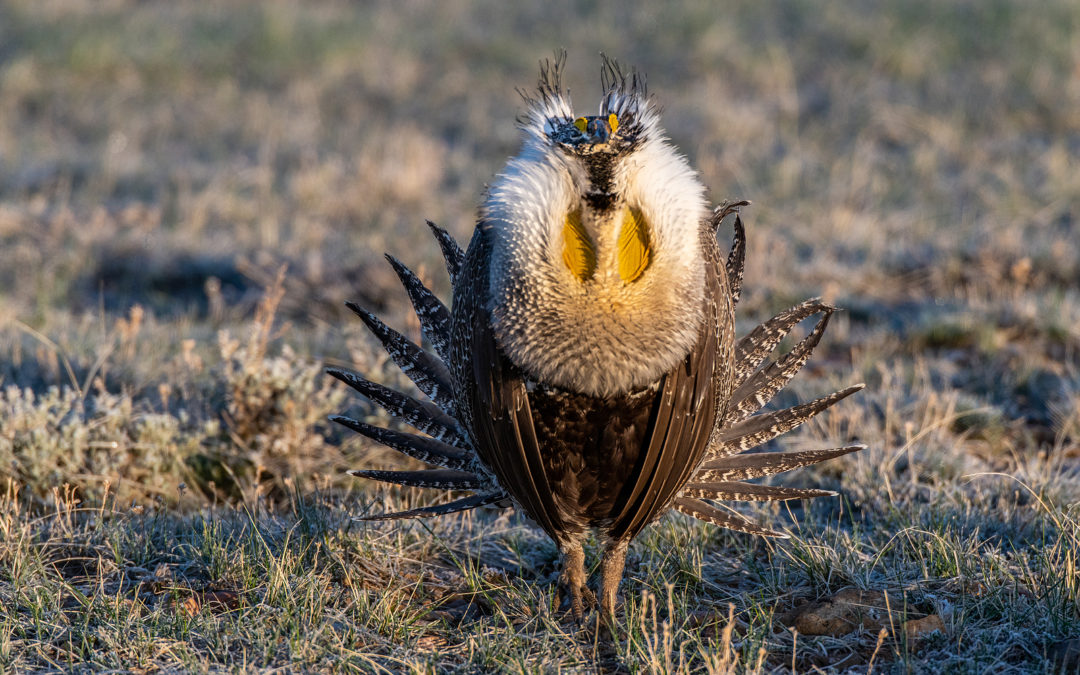 One of the most iconic ground-dwelling birds of the West is the greater sage grouse (Centrocercus urophasianus).  Once common across most of the western prairies, sage grouse populations have been steadily decreasing for decades due to habitat loss.  Much research has been conducted to determine the best conservation measures for saving greater sage grouse, however, searching the expansive ecosystems of the West for suitable grouse habitats is a daunting task.  Recently, sage grouse conservation has benefited from the acute olfactory searching abilities of trained canines.

Being the largest species of grouse in North America, greater sage grouse, also known as sagehen, measure between 20-30 inches in length with males always larger on average.  Males are also heavier, weighing four to seven pounds, whereas females are only two to four pounds.  The species is sexually dimorphic, meaning males and females differ in size and appearance.  Such traits are common among birds who operate in a polygamous society. 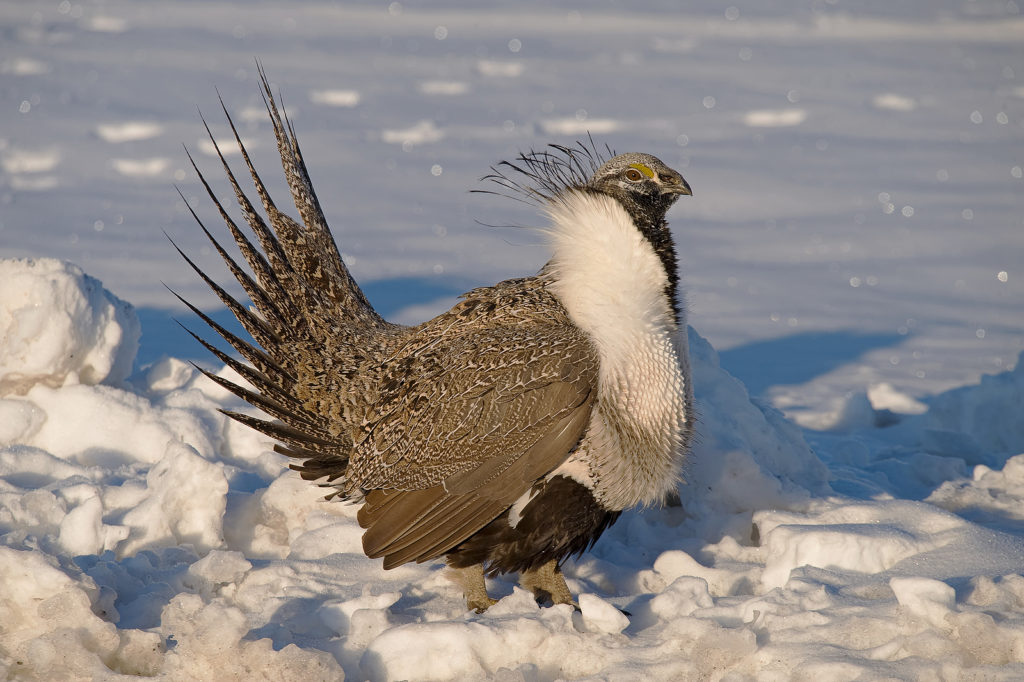 The greater sage grouse is an iconic species of Western prairies, however, populations are quickly dwindling due to habitat loss.

Male sage grouse have a bright white breast with a gray-brown speckled back and a black belly.  They are decorated with white-striped spikey feathers on their tails and a yellow patch over each eye.  Two specialized featherless areas on their neck, known as gular skin, present with a flash of dull yellow when inflated during courtship.  Conversely, females are a blend of brown, gray, and black color that camouflages them well against the prairie vegetation.  The males use their ornamental coloration to attract females during mating, while females use their disguising coloration to avoid predation when nesting.

As their name suggests, greater sage grouse is an important primary consumer within sagebrush communities of western North America.  Their habitat preference is extremely specific—some species of sagebrush must be present for their survival.  Not only do grouse directly eat sagebrush, but also use the cover provided by the plants to successfully nest upon the ground.  The importance of sagebrush within the sage grouse diet has been well documented, with some studies showing the plant makes up to 70% of their food.  When not munching on sage, the grouse will browse other popular plants of the prairie, such as juniper, yarrow, wild lettuce, and dandelions.  They round out their diet by occasionally preying upon insects like ants and beetles.

Before European settlers developed the western prairies, greater sage grouse were prolific across most of the sagebrush ecosystems in the United States and Canada.  Traditionally documented in sixteen states and three Canadian provinces, sage grouse have declined dramatically in just the past few decades.  In Canada, the grouse population dropped an astounding 98% between 1988 and 2012, leading the government to declare greater sage grouse a “Species at Risk” and take emergency action to preserve the few remaining populations.  Likewise, sage grouse were extirpated from five US states by 2013.  An estimated sixteen million grouse had been cut down to only 200,000-400,000 birds remaining by 2016, prompting the International Union for Conservation of Nature and Natural Resources to list sage grouse as “Near Threatened” status.

Proposals to list sage grouse under the Endangered Species Act fell short, however, as the federal government claimed the necessary drastic conservation measures would disrupt agricultural practices and fossil fuel development.  The US government claimed more research was needed before critical habitat could be outlined.  Multiple conservation groups took up the challenge and now greater sage grouse are one of the most studied ground-dwelling birds on the continent.  However, some agriculture and fossil fuel special interest groups continued to politically delay protections for sage grouse.  Finally, the USFWS declared listing the greater sage grouse as Endangered was warranted in 2010, however, protections were again shelved until the Service had “time to enact protections”!  Greater sage grouse continue to struggle, but conservation canines are now lending a paw to support them. 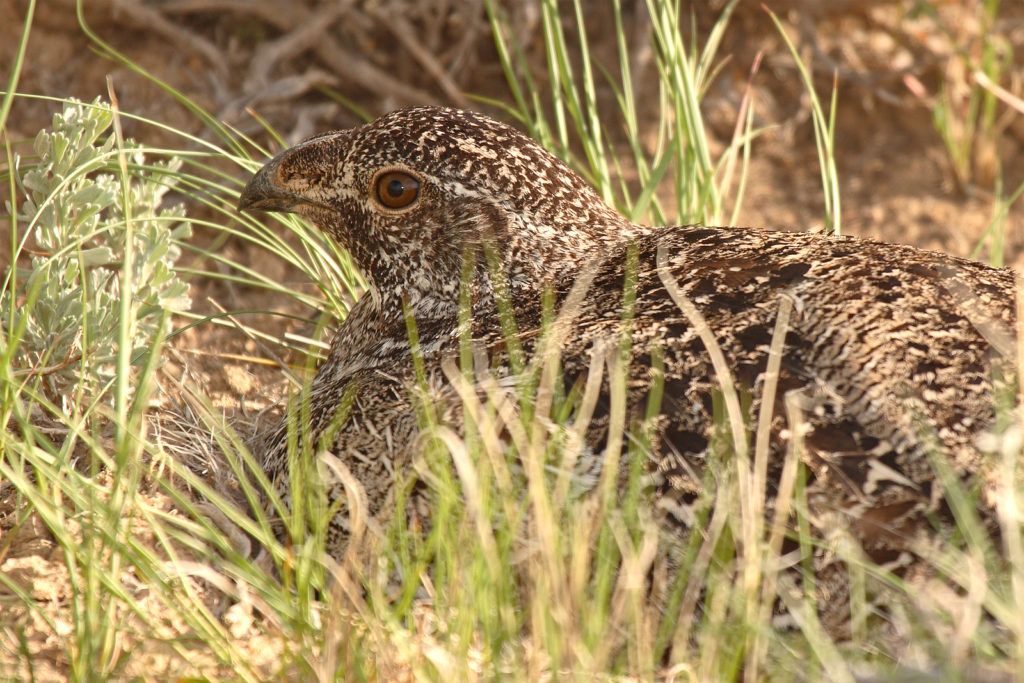 Sage grouse hens are cryptically colored to remain camouflaged when nesting, which complicates viewing them during population surveys.

As with any species conservation effort, obtaining accurate population counts and habitat preferences of sage grouse is the priority.  A few methods of searching the sagebrush landscape have been tested through various projects.  Technicians can conduct walking grid searches across vast expanses of scrublands with waist-high sagebrush and other shrubberies.  Since nests are well hidden under the short canopy, searchers must look under each bush carefully. This arduous task becomes quite cumbersome when hundreds of acres need to be searched.

To increase their effectiveness, biologists began using spotlights during nighttime searches.  To avoid predation, grouse typically bed down for the night under the sagebrush canopy.  Such sedentary targets are easier to view using a spotlight at night than chasing fast fleeting grouse during the day.  Plus, nests are easier to find as mothers will always be tending them through the night.  Trials of both survey methods show nighttime spotlight searches are more accurate, but contain increased danger to technicians navigating wild, rocky terrain in low visibility.  An even better method was needed to conduct accurate, yet safe searches.

Dogs have been used to assist sportsmen since bird hunting originated.  Many dog breeds have been developed through husbandry to specialize in bird hunting.  The spaniels, pointers, and retrievers are prime examples of how humans created hunting companions.  Now, instead of seeking out grouse for slaughter, biologists can use scent-detecting dogs to locate grouse for conservation population counts. 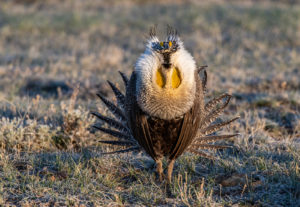 A greater sage grouse cock performing a courtship dance to attract hens. With the help of conservation canines, biologists are finding the best ways to protect critical habitats for this symbol of the Wild West.

Teams of trained dogs with their handlers can precisely scan sagebrush habitat faster than human technician surveys.  During a grid search, once a dog detects the smell of a grouse, the scent is tracked until finding the individual.  The specially trained canines then sit and point a forepaw at the grouse, just like pointer breeds do.  Since grouse view the dogs as predators, they freeze still to camouflage themselves when dogs are nearby.  This defense mechanism allows the dog handlers to count each motionless grouse.  Therefore, canine searches can be conducted in daylight rather than risking dangerous nighttime surveys.

By increasing the accuracy of both individual grouse and nest surveys, conservation canines are allowing wildlife managers to evaluate population trends and create protection policies accordingly.  Additionally, critical habitats for sage grouse survival can be determined using the data achieved by the precise canine surveys.  This information is paramount for deciding future policy regarding sage grouse protection and restoration.  While the federal government grapples with political stalling, conservation organizations and state wildlife agencies are already collecting the necessary evidence to establish habitat protection for sage grouse.  With the help of conservation canines, hopefully, sage grouse are provided the protection they deserve for survival.

For further reading or to support sage grouse conservation: