How do dogs help with Kemp’s ridley sea turtle conservation? 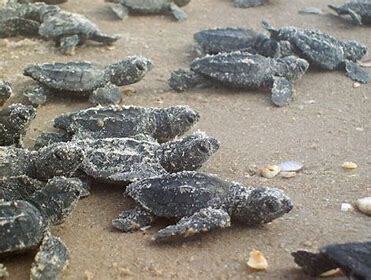 Our next journey along the Canines Assisting Conservation world tour takes us to one of my favorite ecosystems—the Atlantic beach.  We have examined how scent-detection dogs aid terrestrial species as well as some unlikely marine species conservation projects, but what about those species who depend upon both marine and terrestrial systems for survival?

One sea turtle species, the Kemp’s ridley sea turtle (Lepidochelys kempii) has experienced a massive decline in population since the 1940s and efforts are now underway to preserve critical nesting habitat before extinction occurs.  Conservation canines have joined these efforts to save the most endangered sea turtle on the planet. 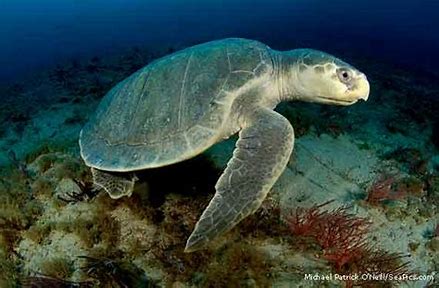 In addition to being listed as the most critically endangered sea turtle by the International Union of Conservation for Nature, Kemp’s ridley turtles are also the smallest of the marine-living turtles.  At maturity, their carapace (shell) only measures 23-28 inches, and they weigh in around 80-100 pounds, which is significantly smaller than their ocean-dwelling relatives.  Despite their petite size, Kemp’s ridleys can be found roaming across most of the Atlantic Ocean, even traversing to Europe and the Mediterranean Sea on occasion.  However, the species is mostly concentrated in the Gulf Of Mexico and shallow waters of the mid-Atlantic coastline.

As with all turtle species, they require dry land to lay their eggs, and Kemp’s ridleys are very particular of which sandy beach qualifies as a nursery.  Almost all females arrive at only two beaches, Rancho Nuevo in Northern Mexico, and Padre Island off the coast of Texas.  After mating offshore, females drag themselves to dry sand two or three times a summer during daylight (the only diurnal nesting sea turtle), where they lay up to 110 eggs per clutch.

While the eggs undergo their 45–70-day incubation, they are extremely vulnerable to predation, pollution, poaching, and inadvertent trampling by beachgoers.  Fisheries have equipped special devices to prevent accidental catches of sea turtles to minimize threats at sea, but land-based threats continue.  Biologists have been attempting to identify individual beach nests to protect them from human traffic and even wild predation.  However, the process of finding Kemp’s ridley nests is difficult due to their preference of using dry sand, which typically does not leave any tracks from the mother turtle.  Plus, Kemp’s ridley sea turtles are known to come ashore to nest on the windiest days, sweeping away any residual flipper tracks.  Without any markings to indicate a nest, and since the eggs are buried in several inches of sand, finding them is challenging for biologists. 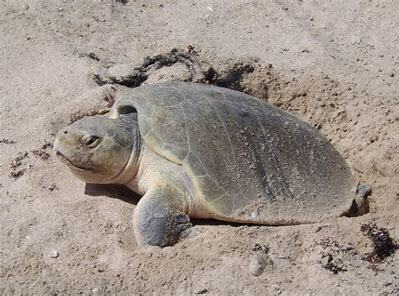 Traditional methods of locating Kemp’s ridley subterranean nests included field technicians using poles to stab through the sand or randomly digging holes across the length of the beach.  However, the use of poles damages or destroys the eggs, while randomly digging search holes is both labor-intensive and unreliable.  Then in 2007, a National Park Service employee had an idea—if dogs can be trained to sniff out bombs or other imperiled wildlife, why not try to use their olfactory abilities to find turtle nests?  The first trials with her personal dog were an immediate success!  She initially trained her dog to alert at the scent of turtle eggs, then later the method was refined to seek out the scent of oviductal fluid, a mucus that covers the eggs during the laying process.  This way only freshly created nests are located while older abandoned nests are ignored.

Scent-detecting dogs are now commonly incorporated into sea turtle nesting studies where they have greatly increased the effectiveness of locating nests.  Once a conservation canine locates a nest site, biologists can often exhume the eggs within one minute, a process that could take hours before dogs joined the search.  The eggs can then be placed in an incubator for safekeeping until hatching occurs and the young turtles returned to the ocean.  If wild hatching is preferred, then the nest can be protected by signage or barriers keeping humans away, or a metal grate placed over the nest preventing predation from wild carnivores.

Thanks to scent-detecting dogs, more Kemp’s ridley hatchlings are surviving and boosting the endangered population.

Regardless of which method is used to save the nest from destruction, dogs have greatly assisted conservation efforts for Kemp’s ridley seas turtles by accurately and safely locating their hidden nests.

For further reading or to help Kemp’s ridley sea turtles: