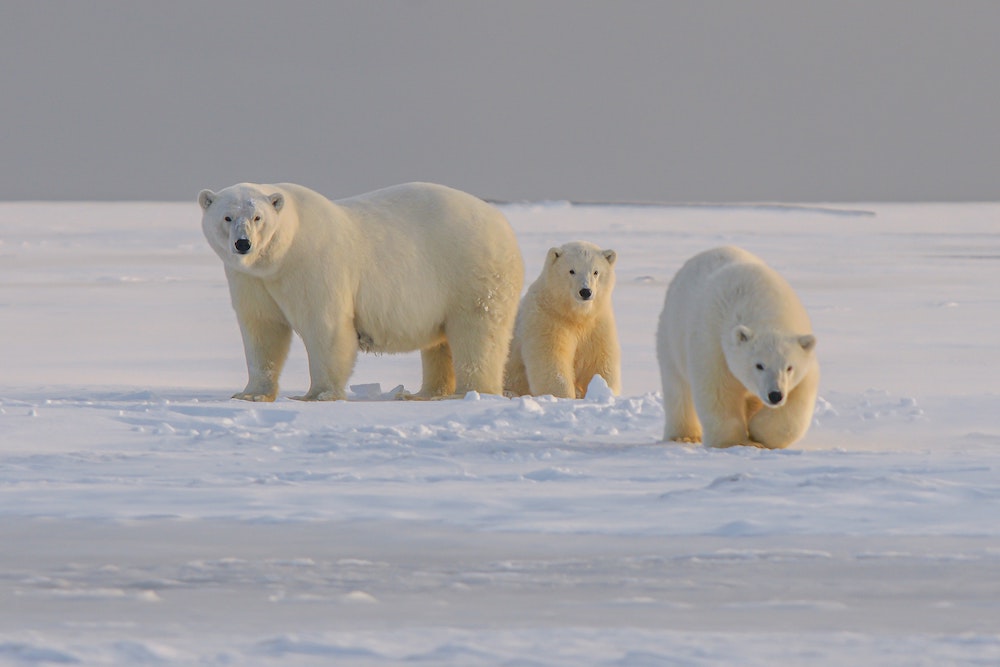 Polar bears are at the top of their food chain. They are also considered marine mammals. These bears weigh hundreds of pounds: females can get up to about 1,000 pounds, while males can weigh significantly more than that.1

Their size, mixed with other adaptations helps them survive the freezing climate they thrive in. They have:

These are essential characteristics to help them stay alive in their habitats. These bears don’t go into a den to wait out the winter unless they are pregnant. However, pregnant or not, they need to put on weight to survive the months when prey is scarce.1&2

When they hunt, they’ll hang out near the edge of the ice and wait for a seal to pop up for some air. Then they’ll grab it. They usually eat ringed seals and bearded seals, but they’ll also go after carcasses of whales, and they’ll eat eggs, berries, and human garbage they come across.2

Between April and July is when they’ll gain the most weight to sustain them in the 3-4 months of the year where they won’t have access to food. The main problem these bears face is climate change affecting their hunting season – since the ice they need to access their prey is forming later and melting earlier.2

This is what leads scientists to believe that we’ll see more polar bears starve as climate change worsens, and it’ll put the entire population at risk.3 This is because when bears mate, the embryo isn’t implanted right away. There’s a delayed implantation process to make sure the female has as successful pregnancy as possible. Females need to be at a specific weight range for their bodies to proceed with the pregnancy. Otherwise, the body will just reabsorb the embryo and they’ll try again the following year.1

Climate change is narrowing the hunting season, making it harder for polar bears to put on the necessary weight. Without it, females will have a harder time reproducing. This is a major risk for the future of polar bears.1

This is also coupled with climate change changing their habitat. The floating ice they walk over to get better access to their prey is getting further away from the shore. So polar bears have to swim longer distances. This puts them at risk for drowning, especially when the warmer waters bring storms.1

The risk they face is serious and in 2008, polar bears were listed as threatened under the Endangered Species Act. They’re the first vertebrate species listed specifically from the risk of climate change.1

Climate change poses a major risk to our world in a variety of different ways. Many organizations are working hard for changes to be made to combat these threats. Check out our blog post here on What’s at Stake Without Conservation.