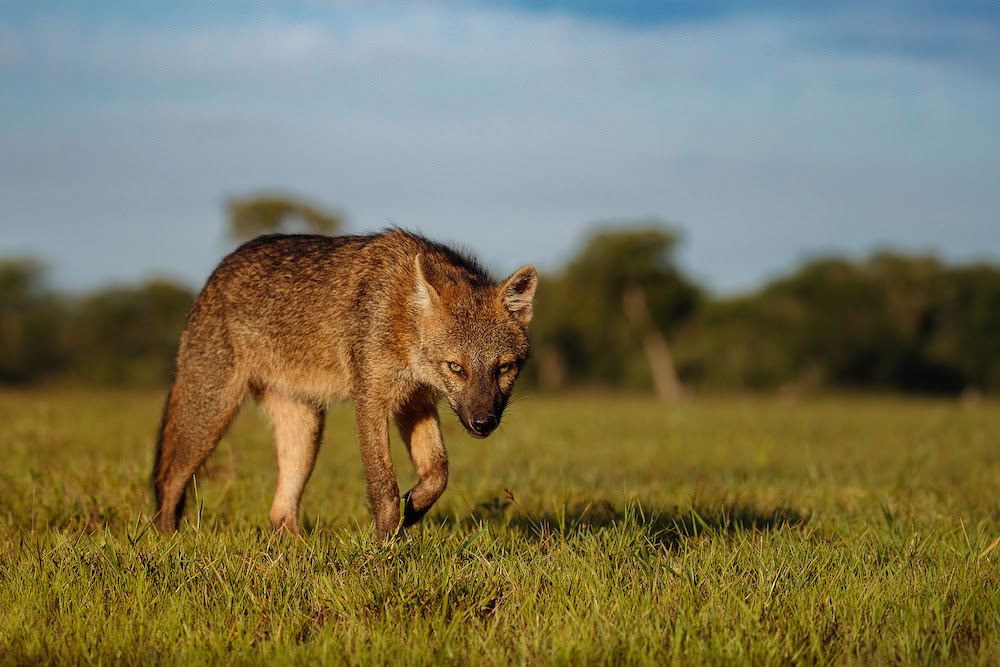 Just as in North America, the mesocarnivores of South America face threats borne from misunderstanding.  The crab-eating fox, also known as the wood fox or maikong, is one of those species that are wrongfully persecuted by livestock producers while also losing habitat to human development.  Although not a true fox, the crab-eating fox resembles the small canids of the North and holds a similar ecological niche.  By controlling small mammal and insect populations, they maintain a vital role in much of South America’s tropical savanna and woodland ecosystems.

Appearing somewhat like the North American gray fox, crab-eating foxes are predominantly grayish brown with red hues on their neck and head occasionally.  They measure around two feet from head to tail and weigh up to seventeen pounds.  Their long, very bushy tail adds another twelve inches to their frame and becomes elevated when excited, just like other canids.  Ears are wide and round to listen for both prey and dangers through the dense thickets.  Compared to true foxes, crab-eating foxes have shorter legs and fur, which is an adaptation to the tropical climate where they exist.

RANGE
Crab-eating foxes only exist in South America, and most populations are concentrated along the Northern and Eastern coastlines.  The tropical savannas and woodlands of Columbia and Venezuela are prime habitats in their Northern range.  However, the sub-tropical forests and plains extending from Brazil to Northern Argentina provide most of the preferred habitat for the crab-eaters.  Their bodies and senses are adapted for travel among extremely dense thickets along waterways, where they hunt.  Crab-eating foxes seem to thrive in most ecotones except high-elevation mountains and rainforests.  Since much of their low-lying territory is prone to floods during the extensive rainy season, the foxes have learned to migrate to higher elevations as the wet season approaches.

LIFE CYCLE
Like many other canines, crab-eating foxes are monogamous, often remaining together throughout their lifespan.  During the wet season when food is abundant, multiple pairs may join to hunt as a group.  However, as the dry season begins and food becomes scarce, the pairs usually go their separate ways and individual territories are established.  Still, crab-eating foxes are not highly defensive of their territories like larger canines.  To assist with social cooperation, they have developed a vocabulary of vocalizations including barking, howling, and whining.  When a breeding pair become separated while hunting, they commonly use these vocalizations to locate one another.

A breeding pair may produce one or two litters per year.  Due to their tropical climate and consistent food sources, the timing of breeding is flexible.  However, most crab-eating pairs copulate in either December, July, or both months.  Gestation lasts 56 days after which up to six blind and deaf cubs are born.  By two weeks the cubs have vision and hearing, then are weaned to solid food after three months.  Both the mother and father provide food and guard the cubs for their first year.  The cubs reach sexual maturity around one year of age and venture off to find a mate.  Crab-eating foxes have lived up to 11 years in captivity, but most wild foxes probably do not survive quite as long.

ECOLOGY
As their name suggests, crab-eating foxes spend a great deal of time searching mudflats at low tide for their favorite food—crabs.  However, as with all true foxes, crab-eaters are omnivorous and opportunistic.  Their vast diet consists of a multitude of species, including many small mammals, amphibians, reptiles, fish, birds, insects, and crustaceans.  Studies show their diet changes as the seasons change.  During the wet season, crabs comprise most of their quarry, while they concentrate on more insects during the dry season.  Researchers have also noticed their diet changes according to location, leading to the belief the foxes are highly adaptive to feed upon locally available food sources.

HABITS
Crab-eating foxes are mostly nocturnal, but occasionally can be seen moving about during the day.  Although mating pairs often travel across distances together, they separate and hunt individually to maximize their opportunities.  Howling and whining keep the pair in vocal contact while separated.  Both males and females use raised-leg urinations to mark territory, like larger canines.  Crab-eaters tend to defend their territories more during the dry season when food is less abundant.  However, overlaps of their half-square-mile territories are common year-round.

INTERACTIONS WITH HUMANS
Although crab-eating foxes are beneficial to human society, their only threats originate from that same human society.  They have been hunted and trapped for sport throughout generations, yet no regulations or limits exist in most countries.  Although their fur is not highly prized, some efforts to farm crab-eaters for their pelts have been successful.  Development of housing and industry within their range poses significant challenges for foxes and is believed to be a leading cause of local population declines.

Still, the largest danger to crab-eating foxes is the unwarranted killing by livestock producers.  The misconception that foxes are a predator of livestock has no merit, yet this belief is widely accepted and causes needless death to many innocent foxes.  Although their population is considered stable throughout their range, ranchers are responsible for local eradications and fragmentation of habitat.  More education is needed to dispel the myths held by the agriculture community and stop the misled persecution.

CONCLUSION
Crab-eating foxes hold an important mesocarnivore role within the South American ecosystem.  Additionally, they help control insect and rodent populations that otherwise could cause detriment to human interests, such as agriculture.  Unfortunately, these generalist omnivores are losing ground to human development and excessive hunting practices.  Furthermore, the agriculture community continues to slaughter foxes under misguided beliefs.  Education and community awareness are sorely needed within the range of crab-eating foxes before their populations decline.  As with mesocarnivores of the North, misunderstanding of the ecological role and predatory habits of this unique species is the primary threat to their existence.