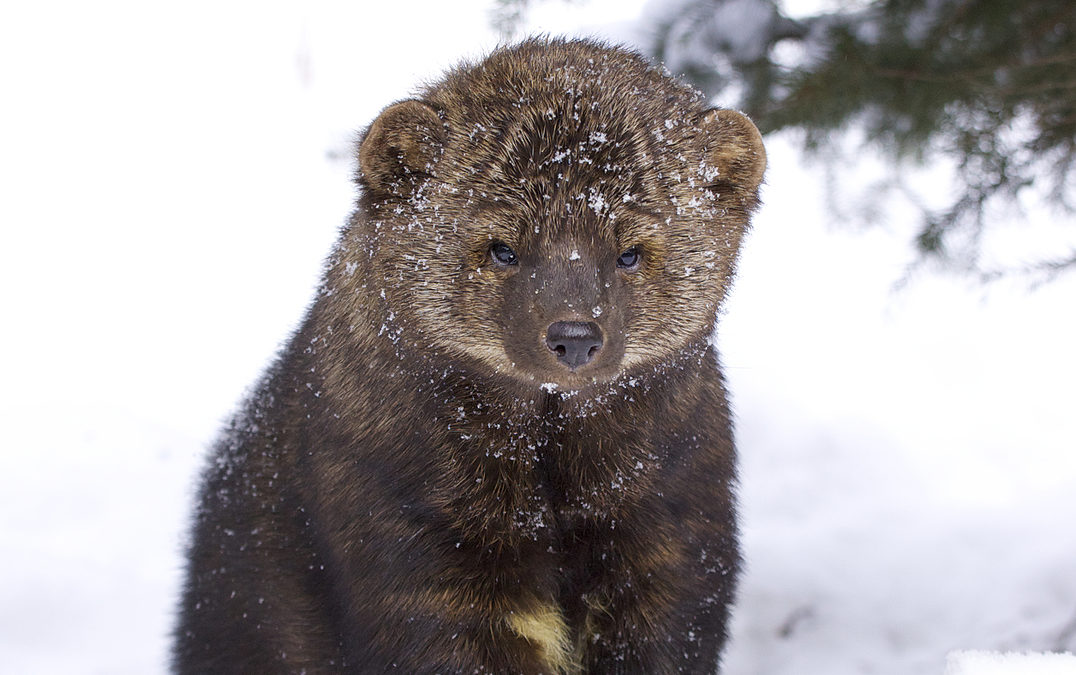 The fisher is one of the most reclusive and therefore misunderstood mammals in North America.  Sometimes known as a fisher cat, this large weasel is neither a cat nor does it eat fish, hence both titles are misnomers.  The name is believed to have originated by European settlers who called the animal “fitch,” a common name for the European polecat.  Throughout history, the species has undergone taxonomic reclassification several times, but recent DNA research proves the fisher is the only surviving member of the Pekania genus.  Furthermore, no subspecies of fishers are known to exist, making it a rare monotypic species.  The closest relatives to this unique species are the marten, weasels, and mink.

Resembling an overgrown weasel, fishers have an elongated body with short legs.  Females measure 2.5-3 feet long and weigh between 4-6 pounds.  Being sexually dimorphic, males are much larger than females, growing up to four feet long and weighing 10-13 pounds, with the largest on the record being twenty pounds.  Both sexes have the same deep brown coloration, however, females tend to possess softer, finer fur.  Some populations have white-tipped fur providing a frosted appearance in sunlight.  A long tail provides added balance when climbing trees and ambushing prey.

The paws have evolved for both tree climbing and winter travel.  Large-sized paws provide for a snowshoe effect, allowing travel across the surface of deep snow.  Fishers have five toes with retractable claws and patches of fur between the heel pads and toes providing extra traction on icy surfaces.  The hind paws can rotate 180 degrees, which assists in climbing and navigating through tree canopies.  This rare foot rotation makes fishers one of the few mammals able to climb down trees headfirst. 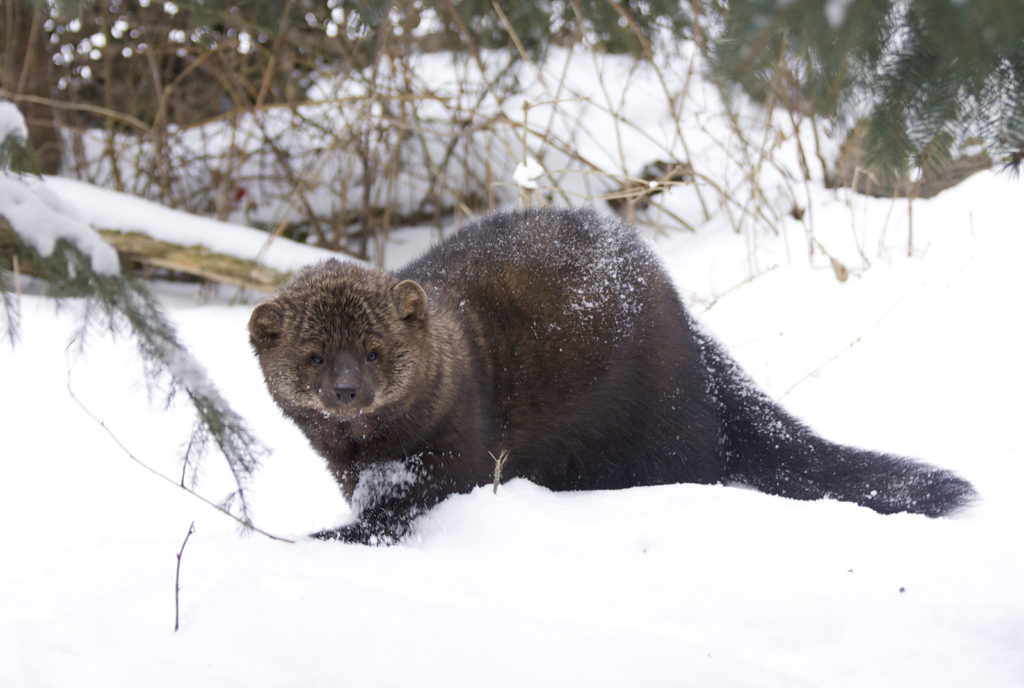 The fisher is well adapted for a life of solitary hunting in dense forests.

Historically, fishers were widespread across conifer and hardwood forests of North America, however extensive trapping and deforestation reduced their range to the boreal forest of Canada and remote forests of Western United States by the early 1900s.  However, after trapping became regulated and clear-cut logging was curbed in the 1930s, fishers have slowly rebounded in portions of the US and Canada.  Their recovery was assisted by numerous reintroduction projects across the country.  Scattered, yet stable, populations now exist in the Pacific Northwest, Sierra Nevada Mountains, and New England areas.  Fortunately, evidence suggests fishers are slowly expanding southward as reforestation occurs.

Fishers are solitary for most of their lives, only socializing with others during breeding.  Both sexes maintain territories up to five square miles, but male and female territories often overlap, likely to assist in breeding.  Hunting ranges can be expanded in winter if food becomes scarce.  Males venture out in March searching for females, following scents left behind in her tracks.

After mating, pregnancy is delayed an unusually long ten months until the next February.  Gestation is then another 50 days, with 1-4 kits being born within a nest cavity of a large tree in April.  Young are blind and completely dependent on their mother for the first 7-8 weeks.  By August, the kits travel with their mother on hunts to learn survival skills.  Usually, by the beginning of winter, the juveniles live independently but remain within their mother’s territory until finally dispersing in February.  The young adults then remain solitary until their first breeding season the following year.  The typical lifespan for a wild fisher is about 7 years. 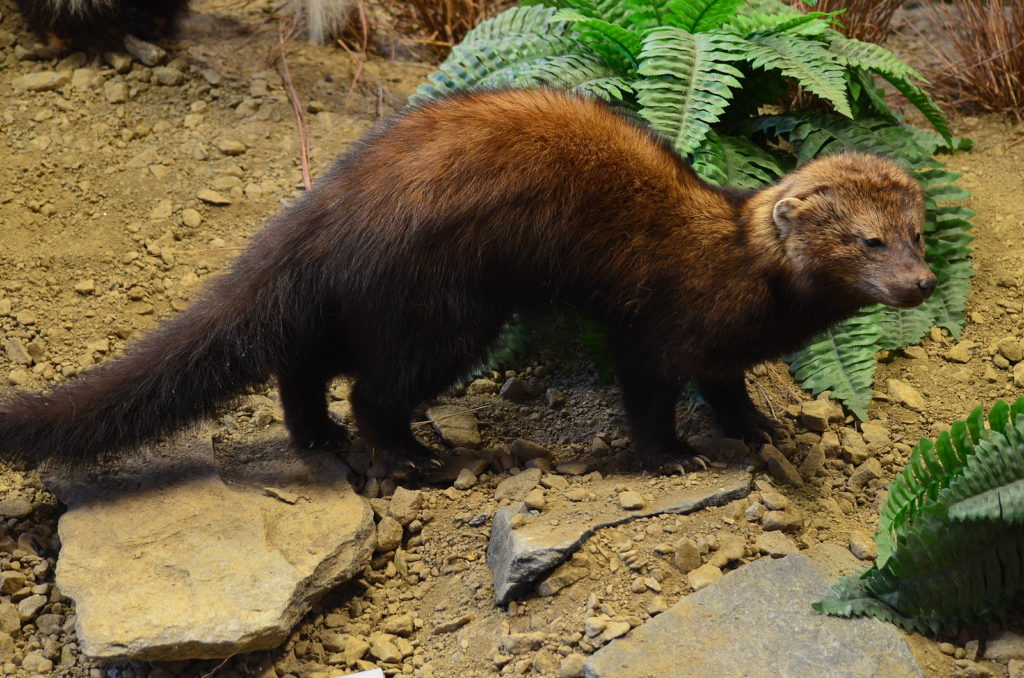 Although fishers prefer snowshoe hares and porcupines for their main diet, they will eat almost any small mammal, bird, or insect.  Keeping with the mesocarnivore omnivorous trait, they also eat mushrooms, berries, and tree nuts to supplement their nutrition.  When available, carrion is also consumed.  Seldomly, fishers have been known to prey upon larger animals, such as Canada lynx and turkey, but these occasions are likely opportunistic.

Like their weasel relatives, fishers are known for being aggressive and tenacious when hunting.  This behavior is evident by the fact that fishers even hunt bobcats, who are their primary predator.  Furthermore, they are one of the only carnivores who specialize in hunting porcupines.  Observations indicate fishers either flip the porcupine over, exposing the vulnerable underside or repeatedly bite the face of the unlucky prey until it succumbs up to thirty minutes later.

In addition to bobcats, fishers must be on the lookout for predation by coyotes, cougars, wolves, and wolverines.  Young kits are vulnerable to raccoon invasion of their nest, but mothers aggressively defend their young, making any attempts risky.

Fishers are particular about the density of forest in which they inhabit.  Studies have shown they prefer a thick canopy of at least 70% sky coverage, which is usually seen in old-growth or undisturbed forests.  When trees are thinned by harvest or development fragmentation, fishers are quick to move away from the area.  Therefore, remote dense forests are prime habitats for this recluse.  Research has also shown when fishers come across clearings devoid of trees they will always run as fast as possible to the other side and back into tree cover.  They truly are only forest dwellers.

As with many other mesopredators, fishers are crepuscular, being most active at both dawn and dusk.  Although excellent climbers, they spend most of their time on the forest floor in search of any potential food.  Their sensitive hearing and smell not only assist in foraging but also allow them to detect approaching danger.  If a threat is detected, fishers quickly climb a nearby tree and vanish into the canopy making them one of the most difficult forest mammals to view.  Most humans never see a fisher in the wild, despite they occasionally reside near our communities.

Unfortunately, most historical interaction with humans was a great detriment to fishers.  Extensive, uncontrolled trapping and deforestation brought most fisher populations to the brink of extinction.  In their Southern range, fishers may have been extirpated permanently due to human actions.  However, modern science has taught us the ecological importance of fishers, leading to reintroduction and recovery efforts across the country.

Although fishers are very picky about the density of forest in which they live, they seem to tolerate residing in proximity to human housing.  Studies have shown fishers will set up new territories and even nest within close range of human development if the forest canopy is satisfactory.  Given the super elusive nature of fishers, many homeowners may not even know fishers live nearby.  Biologists believe human presence is not limiting fisher recovery and expansion, however, the forest fragmentation that typically follows human development certainly is a hindrance to fishers. 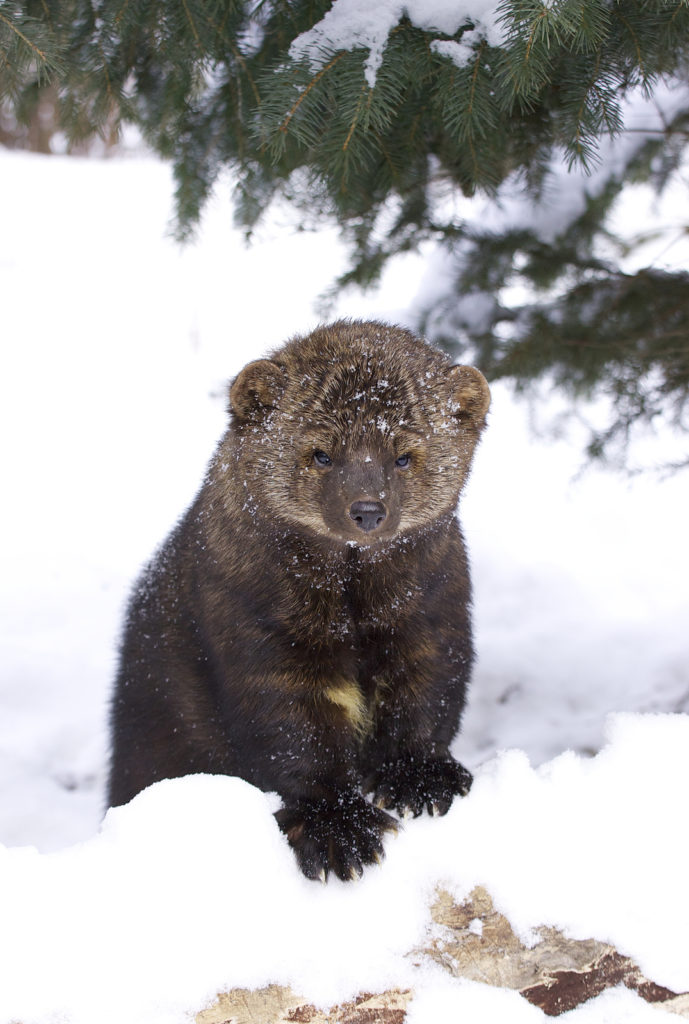 The presence of fishers in a forest system has always been considered an indication of good forest health.  Their mesocarnivore niche plays a key role in controlling primary consumers, especially porcupines.  Forest managers occasionally contend with damage caused by an abundance of porcupines as they can girdle trees by foraging bark.  Since few predators select porcupines as prey due to their excellent spikey defenses, these wood-chewers can become somewhat of a pest in some areas.  Fishers provide the only predatory control over porcupines in healthy forest systems, so fisher repopulation is an important conservation practice.  Your house could even benefit from the presence of fishers, saving it from the constant gnawing of hungry porcupines.

Under normal circumstances, fishers always avoid contact with people, however, if cornered while being trapped, they can become quite aggressive in defense.  Some anecdotal reports of fisher mothers protecting their nests from people have also been reported.  Two incidents where fishers attacked young boys have been documented through history, however, these occurrences are considered highly unusual, and the culprit fisher was likely not healthy.  No reports of fishers instigating attacks on adults could be found.  Some believe dogs and cats have occasionally fallen prey to fishers, but evidence of such occurrences is lacking.  However, hungry fishers have been known to raid chicken coups at times, although these events are also rare.  Safe chicken husbandry practices can prevent most fisher damage, though.

Fishers hold a vital role in ecosystem health but have suffered greatly due to human actions throughout history.  Thankfully, increased trapping regulations have allowed some populations to rebound, while artificial reintroduction has returned fishers to suitable habitats across the country.  We know these reclusive mesopredators can tolerate living around us, and rarely cause trouble.

Yet, they provide great assistance in maintaining forest health and saving our structures from porcupine damage.  All we need to do is allow dense, old forests to remain for their homes and be good neighbors by learning their values and habits.

Jeremy Heft
Biologist and Captive Wildlife Consultant
Wolf Education and Research Center
Jeremy feels privileged to be one of the few who have encountered a fisher in the wild, especially since they have not been documented in this region prior.  The brief visit with the ultra-recluse was a highlight of Jeremy’s field biology career.

For further reading or to support fisher conservation: