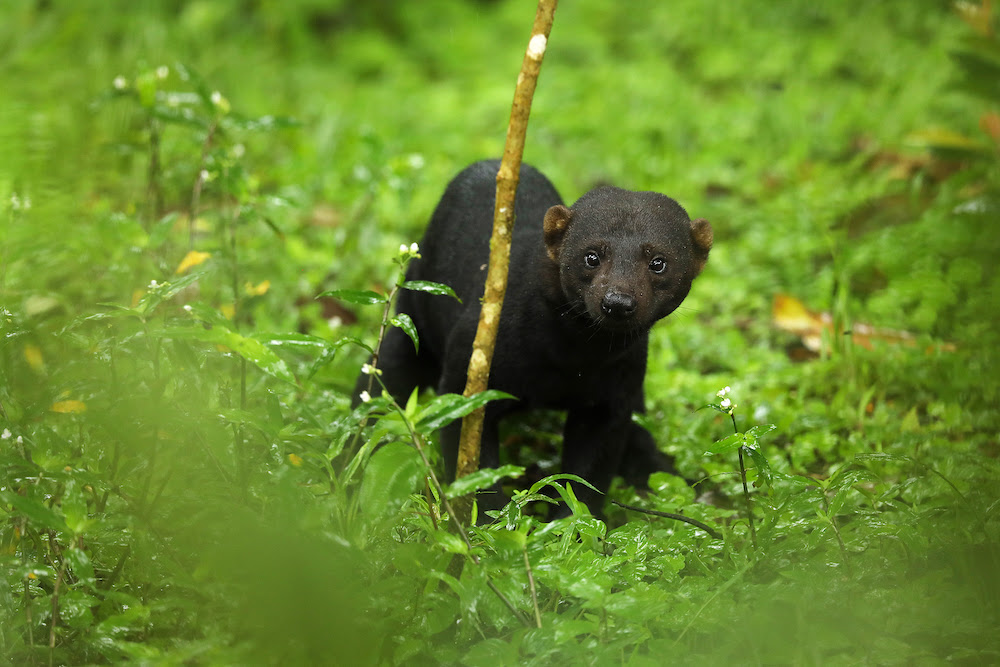 The Mustelidae, or weasel, Family is responsible for most of the North American mesocarnivores, however, some representatives of this diverse group also inhabit the same ecological niche further South.  One of the weasel-like species occupying the forests and savannas of Central and South America is the tayra, a unique medium-sized predator somewhat resembling a small, sleek wolverine.  Tayras are closely related to wolverines but have adapted a lifestyle of using trees to hunt and travel like martens, their smaller relatives of North America.

The species is known by different local names depending on the region; however, most languages are similar in their reference to the weird appearance of the animal.  Even their scientific name is attributed to their uniqueness, with Eira being their aboriginal name in Bolivia and barbara translating to “strange.”  Ranging from 22-28 inches in body length with the addition of a bushy tail extending another eighteen inches, tayras are long and lanky like other mustelids.  However, what sets them apart is their tall, muscular legs compared to the usually short-legged weasels.  They are heavier than most other small mustelids too, weighing between 6-15 pounds as an adult.  Their paws have short, sturdy claws, and in combination with their strong legs, tayras are well adapted for climbing trees.

The deep brown to black fur is relatively consistent in shading across the body, tail, and legs.  However, their head and shoulders are usually a paler shade than the remainder of the body.  Each tayra has an orange-yellow spot located on the neck and chest.  The shape and color of this marking are unique to each tayra and can be used to identify individuals.  Short, rounded ears provide multi-directional hearing, while long whiskers provide tactile sense around the mouth.  The large nose pad allows for accurate olfactory perception, a skill critical for hunting among the dense jungle vegetation.  Males and females appear generally the same, however, males tend to be larger and more muscular, a trait common among the weasels.

RANGE
Primarily a South American resident, tayras occupy most of the continent east of the Andes Mountains.  Their range spreads south to the northern border of Argentina and extends north through Central America to cover most of Southern Mexico.  Tayras also exist on the islands of Trinidad and Tobago off the Venezuelan coast.  Fossil evidence shows the species originated in South America and has not been able to move further north than Mexico into North America.  Throughout the tayra range, seven subspecies are recognized as being distinct populations and are separated mostly by latitude.

Tayras only live in established forests with adequate canopy, likely due to their dependency on tree climbing for survival.  Both tropical deciduous and evergreen forests are acceptable, but they typically avoid large clearings and pastures.  Recent studies show tayras can occupy orchards and cultivated fields if enough forest remains nearby.  However, mass land clearing for agriculture is the most significant threat to tayra survival and research proves populations crash where such disturbance occurs.

LIFE CYCLE
Tayras differ from other mustelids in their reproduction cycle and process.  First, unlike other weasels who have defined seasons of breeding, tayras can mate year-round.  Females can enter estrus numerous times each year, with the trigger for each event not well understood yet.   Then once mating occurs, the embryo begins development immediately, not paused for months like other mustelids.  The lack of seasonal change among the tropics likely is one of the reasons for this year-round reproduction, where colder climate dwelling weasels must time the birth of young with a season of ample food.

After a gestation of around 65 days, one to three pups are born with their eyes and ears closed.  The mother raises her young alone, providing constant care for the first month of life.  After around 40 days, the pups’ eyes and ears are open and they begin exploring outside the tree cavity den.  After one hundred days the pups are weaned to solid food, then their mother brings injured or incapacitated prey animals back to the den, so the youngsters can practice hunting and killing skills.  After six months, the pups are ready to venture away from mom and establish their own territory.  If all goes well, tayras can have a long lifespan of up to 18 years in the wild.

ECOLOGY
As with all other terrestrial mesocarnivores, tayras are omnivorous.  Their tree climbing skills allow them to harvest a variety of fruit from the forest canopy or raid the honeycomb of a beehive.  They may also prey upon birds or their eggs when navigating from tree to tree.  When on the ground, tayras primarily use their superior sense of smell to initially locate prey.  Once on the trail of potential food, tayras relentlessly follow the scent until close enough to rush the prey and pounce.  Surprisingly for a predator, tayras have poor eyesight, so rely upon scent and hearing for detecting potential quarry.  Still, they remain excellent hunters of rodents and other small mammals, lizards, and invertebrates such as insects.

Not much is known about predation upon tayras, but several larger predators and raptors likely prey upon them.  To date, their only well-known predator is the harpy eagle.  This danger from above may be the main reason tayras avoid large clearings, where they would be vulnerable to raptors.

HABITS
Although occasionally may be seen at twilight or night, tayras are most active during daylight hours.  Originally believed to be solitary, some reports of small groupings have been observed recently.  Further study is needed to determine if these groupings were pups traveling with a mother, or adults being social.  Some vocalizations between tayra have been documented, leading some biologists to wonder if they could have some secret social society that has not yet been realized.

Like many other weasels, tayras use a bounding gallop when moving quickly across the ground or on branches.  Using their long tails as balance, they are known to leap from tree to tree when being chased.  Perhaps the most fascinating behavior of tayras is the evolution of caching food for later consumption.  The act of gathering unripe bananas, which are not edible at the time, then hiding them from others has been well documented among tayra.  Once these hoarded bananas ripen a few days later, tayra then eats the edible and nutritious pulp of the fruit.  This phenomenon of planning when food is edible is known as “prospective thinking,” a characteristic only known to occur in primates and birds previously.

INTERACTIONS WITH HUMANS
Traditionally, humans and tayras have enjoyed a positive relationship together.  Indigenous tribes of Central and South America would recruit tayra to live among them because of their excellent rodent catching abilities.  Essentially the large weasels became a primitive form of pest control and later led to the domestication of some individuals.  Even today, tayras are kept as pets and reportedly can be tamed quite easily.

Unfortunately, forest destruction caused by human development has cast a darker shadow on tayra relations.  Although listed as a species of Least Concern by the IUNC, some local tayra populations are suffering drastically due to forest clearing.  As discussed earlier, tayras require continuous tracts of a forest canopy, a commodity that is slowly vanishing from the Amazon.  Tayra populations are declining in most regions due to this threat, yet no protections currently are in place for either the species or necessary critical habitat.  If this process is left unchecked, tayras will soon face significant threats to their existence.

CONCLUSION
As their scientific name indicates, tayras truly are unique mesocarnivores of many South American ecosystems.  By controlling rodent and insect populations, the large mustelids maintain balance within the trophic cascade while providing a food source for raptors and other larger carnivores.  Tayras have even been beneficial to human society through pest management, yet they face a multitude of threats caused by our agricultural expansion into their range.  Deforestation for large commercial crop production is the primary threat to the population, but such practices continue without regard for tayra welfare.  Research shows tayras could adapt to smaller farming operations and continue their important ecological role.  Through education, hopefully, South American agriculture operators will cease the damaging mass deforestation and instead select a more responsible practice that allows tayras to continue their unique mesocarnivore role.