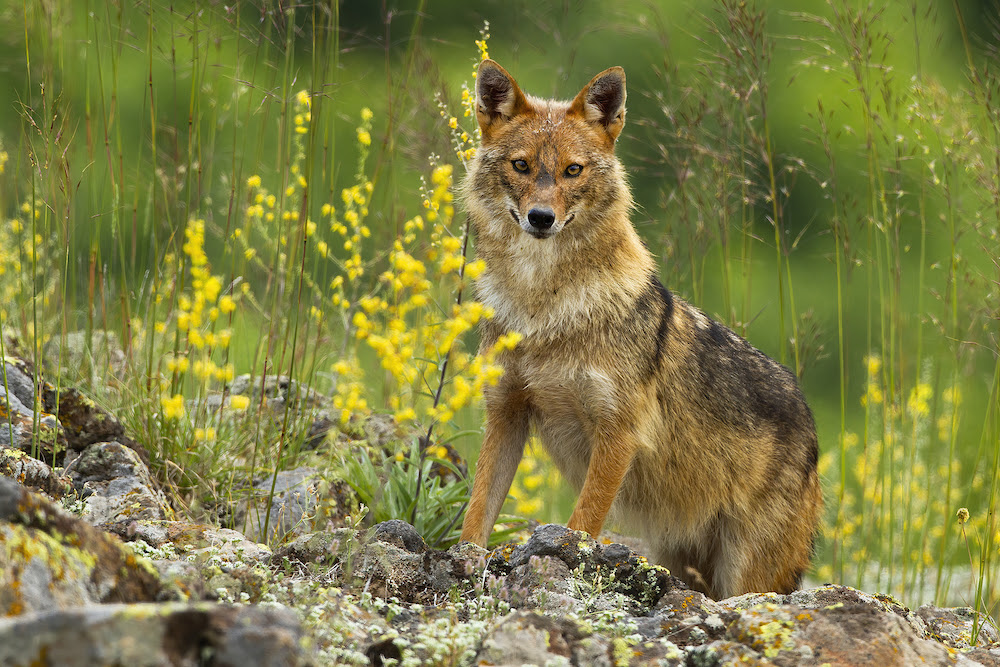 As military conflict rages in Ukraine, real-time updates of human tragedy and infrastructure demolition sweep across media outlets at a depressing rate.  War causes a tremendous toll on human society; however, other less-publicized detriments of military action often go unnoticed by the public.  Destruction of habitat and essential resources creates a devastating effect on regional wildlife populations.  For species that are naturally expanding into Ukraine, such massive disruptions could lead to extirpation before the species has a chance to flourish.  The golden jackal is one such mesocarnivore who may suffer due to the consequences of tyrannical human ideals.

The golden jackal is closer related to wolves than other jackals.  The true jackals of Africa, the black-backed jackal, and the side-stripped jackal belong to their own genus Lupulella, whereas the golden jackal is a member of the Canis genus with foxes, coyotes, and wolves.  Their appearance and behavior more resemble the traditional canines as well.  Standing around eighteen inches at the shoulder with a body length between 27-33 inches, the golden jackal is comparable to the dimensions of a small coyote.  Jackals are also lighter, ranging from 15-30 pounds.  As with all canids, males average a larger size and heavier weight than females.

As their name implies, golden jackal fur is usually a light tan or buff color that varies according to the season, becoming darker during winter.  They occasionally have black highlights and a deep brown saddle on their back, which is also a common color scheme among wolves and coyotes.  However, contrary to North American canines, jackal fur is coarse and short.  They also lack the relatively long legs and large paws characteristic of wolves, showing jackals evolved for warmer, less snowy terrain.

Historically, golden jackals existed in most of Eurasia, spanning across Southern Europe to the Arabian Peninsula and India then to Western Indonesia.  Although healthy populations remain in much of their historic range, golden jackals have been hit hard by the fragmentation of their habitat due to urbanization and agriculture.  Now the military invasion of Ukraine is only adding to the multitude of threats they face.

Within their geographic range, most golden jackal activity occurs in lowlands along rivers, coastlines, estuaries, and even islands, where dense thickets of wetland reeds and shrubs provide adequate food resources.  They occasionally wander into the foothills but are not known to inhabit the mountainous country.  Additionally, their lack of snow travel adaptations relegates them to remain away from deep snow landscapes.

The reproduction habits of golden jackals are like other familiar wild canines.  A typical pack structure is comprised of a mating pair with a few young offspring.  Golden jackals are strictly monogamous, often keeping one mate for their entire life.  Like all canines, they maintain a winter breeding season, however, the timing of this fertile cycle depends on the location where the jackals reside.  Warmer climate habitats tend to begin estrus earlier, whereas colder climates wait until later in winter to breed.  Just like wolves, the gestation period of golden jackals is 63 days, after which 3-8 puppies are born.  The number of offspring born depends on the geographic region and health of the mother.

Like other canines, golden jackals excavate dens for the protection of the puppies and mother during birthing.  Both father and mother share the duties of raising the puppies.  Although puppies can begin eating meat at 15 days old, full weaning to solid food occurs around 8-9 weeks.  Pups usually remain with their parents until the conclusion of their first summer, then leave either as individuals or pairs.  Females become sexually viable around one year old, while males are delayed until almost their second year.  In captivity, golden jackals have lived up to 16 years old, however, in the wild most die around 8-9 years old.

Golden jackals hold an important mesocarnivore role within their range.  Being the epitome of a generalist, they not only prey upon small mammals and eat a wide variety of fruits and vegetation, but also consume the carrion of larger animals.  Studies show their diet is highly dependent on their geographic location.  In some areas, jackals specialize in catching rodents, birds, and hares, while in other locations they mostly consume fruits and vegetation, while in other areas they concentrate on following larger carnivores to dine on the scraps of any killed large carcasses.

The favorite prey of jackals while hunting is voles and other rodents, hares, ducks, pheasants, fish, a variety of songbirds, and various reptiles.  When not hunting, they browse the fruits of hawthorn, mesquite, dogwood, olives, wild pears, grapes, nuts, and even sugar cane roots.  They adapt quickly to exploit available food sources and even alter their diets dramatically according to different seasons of the year.

Golden jackals set up territories to defend their food sources from other nearby jackal packs.  However, jackals are not tolerated within gray wolf established territories and will be aggressively repelled, similar to wolf vs coyote interactions in North America.  Likewise, golden jackals push foxes away from their territories to complete the canine territorial dominance cascade.  Predation toward jackals from other canines is rare, however, striped hyenas and Eurasian lynx are known to hunt jackals.

Although they live within a pack, golden jackals typically hunt alone.  During the hunt, listening for small prey in the tall grass is the primary detection method.  Once located, the jackal leaps in the air and pounces upon the target prey, like foxes are known to perform in deep snow.  If an abundant food supply is found, jackals summon their pack mates through howling, just like other social canines.  Pairs of jackals can team up to chase down larger prey animals, such as blackbucks or deer fawns, which can be up to five times heavier than themselves!  Most hunting is performed at dusk or dawn, a trait common among canines and known as a crepuscular activity pattern.

Interestingly, golden jackals can create mutually beneficial alliances with other predators.  In Indonesia, golden jackal packs sometimes cooperatively hunt with dhole packs, increasing hunting effectiveness by expanding prey detection abilities through dense jungles.   Additionally, lone jackals can occasionally team up with tigers in India and travel with them as a pair.  Observations show the jackal uses its keen senses to help detect prey for the tiger, who in turn allows the jackal to consume a share of the fresh kill.

Historically, golden jackals were revered in Indian culture for their intelligence and craftiness.  Hindu and Buddhist teachings depict jackals as being wily like the red fox is portrayed in Native American folklore.  Still, most cultures in their range performed organized hunts of golden jackals throughout history.  Additionally, they were often blamed for the depredation of farm animals and raiding crops, even though such incidents appear infrequent.  Isolated cases of golden jackals attacking people exist in India, however, all incidents are considered in defense of their puppies.  No jackals have ever attacked humans in Europe.

A 2015 study conducted by the Golden Jackal Informal Study Group of Europe (GOJAGE) indicated jackals were returning to Ukraine after being decimated by human development and agriculture plus previous military conflicts.  This welcome return would place the local ecosystem back into a healthier balance and excite biologists for the future well-being of the region.  Then in a tragic turn of events, Russia invades Ukraine in February, jeopardizing not only the people of Ukraine but also the recovery of golden jackals to the area.

Golden jackals hold a vital role in both the culture and ecosystem of the Southern Eurasia region.  Resembling the mesocarnivore role of coyotes in North America, jackals control small mammal, fish, bird, and reptile populations, as well as assist in seed dispersal of many fruit species.  The ongoing decrease in wolf populations has allowed golden jackals to fill the apex predator role in parts of their range, helping to stabilize the loss of the keystone species role.

Habitat fragmentation and agricultural practices remain a constant threat to jackals, however, they are adapting ways to overcome these challenges.  Unfortunately, military conflict is a difficult hurdle for any local wildlife and will undoubtedly cause a delay of golden jackals returning to Ukraine.  We should always remember war produces many more casualties than just human lives and infrastructure.