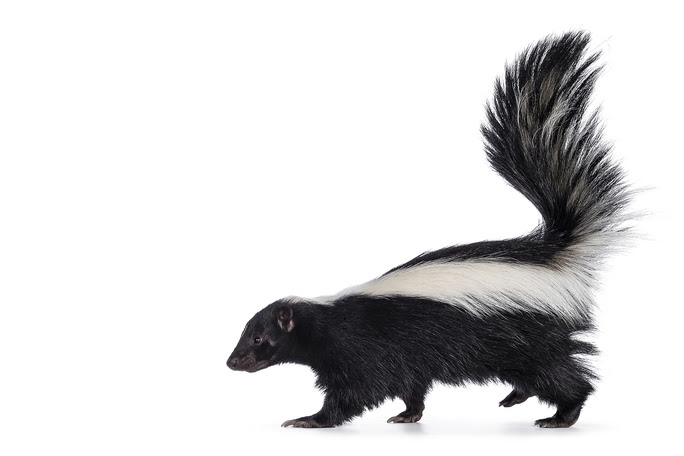 The striped skunk is built for a life foraging at the ground surface, with short, powerful legs and a stocky body.  The head and body measure 13-18 inches, with the notorious tail adding another 7-10 inches.  Weight varies greatly, mostly due to geographic location and subspecies, with average adults between 5-10 pounds, but some as heavy as fourteen pounds.  Males are slightly larger than females on average.

The plush fur is primarily black, with a single white thin line between the eyes, then a large white patch on top of the head that diverges into two wide stripes down the back to the tail, which may also have a white tip.  This pattern has evolved to warn predators of their noxious defenses and has become one of the most well-known warnings in the world.

One of the most widely distributed mammals on the continent, striped skunks inhabit most of North America, from Northern Canada down to Northern Mexico and spanning from coast to coast of the United States.  However, striped skunks only exist in North America, where they share habitat with three other less-populous skunk species (Spotted, Hooded, and Hognose skunks).  Among striped skunks, thirteen sub-species are recognized and dispersed across North America according to geographical barriers.

Read more on their life cycle, ecology, habits, and interactions with humans!