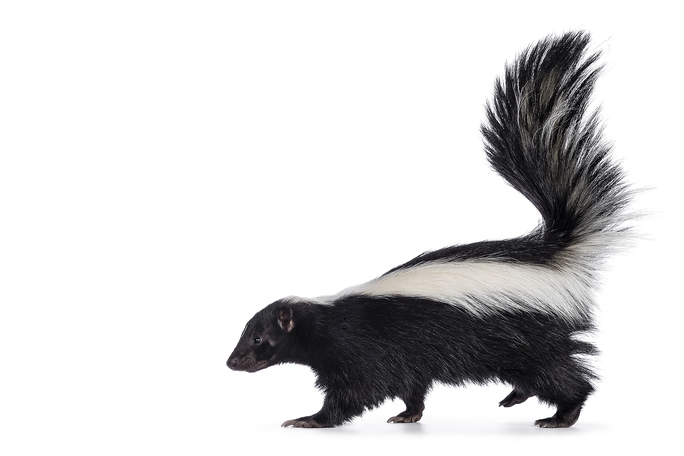 The striped skunk is built for a life foraging at the ground surface, with short, powerful legs and a stocky body.  The head and body measure 13-18 inches, with the notorious tail adding another 7-10 inches.  Weight varies greatly, mostly due to geographic location and subspecies, with average adults between 5-10 pounds, but some as heavy as fourteen pounds.  Males are slightly larger than females on average.

The plush fur is primarily black, with a single white thin line between the eyes, then a large white patch on top of the head that diverges into two wide stripes down the back to the tail, which may also have a white tip.  This pattern has evolved to warn predators of their noxious defenses and has become one of the most well-known warnings in the world.

The notorious black and white coloration of the striped skunk keeps most predators away, but unfortunately also causes undue fear among humans.

One of the most widely distributed mammals on the continent, striped skunks inhabit most of North America, from Northern Canada down to Northern Mexico and spanning from coast to coast of the United States.  However, striped skunks only exist in North America, where they share habitat with three other less-populous skunk species (Spotted, Hooded, and Hognose skunks).  Among striped skunks, thirteen sub-species are recognized and dispersed across North America according to geographical barriers.

For most of the year, striped skunks are solitary and usually remain within a small territory of up to ten acres.  Most prefer to remain within a couple of miles from a water supply, probably because of the abundance of insects such wet habitat provides.  During the annual breeding season of February through mid-April, males venture several miles in search of viable females.  Striped skunks are polygamous, so males breed as many female suitors as possible, with older skunks even having harems.  Males guard each female against competing males for at least a month during active breeding.  Once pregnant, she takes refuge in a den for the 63-day gestation period until the kits are born in May or June.

An average striped skunk litter is comprised of 5-6 kits but could be as many as twelve.  Newborns are blind for the first three weeks and thinly furred, making them fully dependent on their mother’s milk until being weaned around 6-8 weeks old.  The youngsters then follow their mother on journeys outside the den and eventually become independent at about three months of age.  Skunks are then able to breed a year later, but most only have a life expectancy of 3-5 years, with the oldest captive skunk reaching 15 years.

Striped skunks are voracious insectivores, capturing any type and size of an insect, both above and below ground surface.  Their large, sharp front claws allow them to easily exhume subterranean grubs and beetles, as well as dig out earthworms.  When the opportunity arises, skunks can prey upon small rodents or steal eggs from a bird’s nest.  They also scavenge carrion when available, and raid trash cans occasionally.  To round out their omnivorous diet, striped skunks will consume berries, roots, and just about anything digestible.  Living up to their generalist nature, skunks eat any small arthropod, mammal, fish, or plant material they come across while forging. 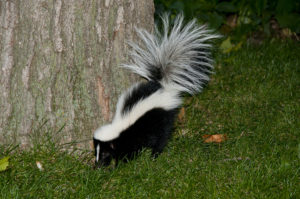 The combination of their potent odorous defense with the distinct black/white coloration makes all North American predators avoid skunks.  After a young, naïve predator first encounters a skunk’s spray, they are likely to avoid any small black and white animal for the remainder of their life.  However, hunger is a powerful motivator, so when starving, foxes, cougars, bobcats, and coyotes may prey upon skunks.  Due to their relative lack of smell, raptors have a much better opportunity with skunks.  Great-horned owls are their top predator in most locations, followed by eagles, but all who dare approach risk blindness by a well-placed spray from the would-be prey.

Originally believed to be nocturnal, new research has shown striped skunks to be crepuscular, or most active at dusk and dawn, in daily activities.  Prefers semi-open or mixed forest country, wherever insect populations thrive.  During the summer, they bed down under a rock overhang or under a stump during the day for shelter.  In fall, skunks dig a burrow to take refuge during wintry weather.  Males typically remain solitary in their burrow, where females will group up for heat preservation.  Striped skunks do not hibernate like many other small ground-dwelling mammals; however, they will become inactive for days at a time during extreme winter weather.  In the North, skunks can lose up to 50% of their body weight through winter as they use their fat reserves for survival.

Although skunks have an incredibly beneficial role in their respective ecosystems, most people would rather not have skunks living in their community.  The two main reasons skunks are not appealing are their foraging habit of digging up flowerbeds/gardens and the threat of being sprayed.  However, the reality is skunks often live secretly near humans without ever being noticed.  They even take shelter under porches or sheds without detection.

Some experienced gardeners prefer skunks around for their excellent control of damaging insects.  The shallow holes dug by skunks while foraging subterranean insects are a small cost for the vastly beneficial impacts of maintaining insect populations.  Skunks are the ultimate organic biocontrol for both rodent and insect pests, and often do a better job than polluting chemicals.  So next time you see small holes dug around your flowerbed or garden, be happy.  You may just have a pest-controlling skunk patrolling your yard, keeping your plants safe.

Although there is always a chance of being sprayed when in proximity to a skunk, the odds are very slim.  Striped skunks have enough pungent musk for 5-6 sprays, after which they become defenseless for days until more mush can be produced.  Therefore, they conserve the smelly defense and will always display warning behaviors before spraying.  When given a chance, striped skunks will always walk away from a threat before resorting to shooting their noxious musk. 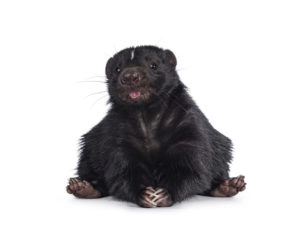 Once the stigma of being sprayed is removed, skunks are actually very cute. They learn to live near people without ever causing problems, yet provide us a great insect removal service! Some folks even keep (usually de-musked) skunks as pets because of their gentle temperament and intelligence.

If you encounter a skunk, first make it aware of your presence by talking.  They have poor eyesight, limited to about ten feet of sharp vision, but excellent hearing and smell.  By speaking, the skunk can gauge your location and distance while preparing to avoid you.  If agitated, skunks will stamp their feet, arch their spine, and wave their tail high.  Once any of these behaviors are observed, back away slowly while talking softly and the skunk will head in the opposite direction.  If cornered or aggressively confronted, striped skunks will then turn around and run backward toward the threat while spraying.  So, if a skunk ever quickly flips their backside toward you with tail up, run away!  Still, it is extremely rare for people to be sprayed.

Sometimes our dogs do not abide by these recommendations, though, and end up returning home exhibiting the stench of a close run-in with a skunk.  If the dog has been sprayed in the eyes contact your veterinarian for advice, but if only on fur the smell can be easily handled with several baths in a mixture of hydrogen peroxide, detergent, and baking soda.  After such an event, most dogs avoid future skunk encounters.  Therefore, most dog owners in skunk country only need to fumigate their canines once in a lifetime.  Interactions between dogs and skunks are often exaggerated in frequency and severity, rarely does the spraying cause long-term issues.

Although living around skunks requires some awareness and avoidance of possible spraying, the ecological benefits of the important mesocarnivore far outweigh the effort of precautions.  Without striped skunks in our world, insect and rodent populations could overwhelm our society.  So instead of fearing this misunderstood mammal, we should instead be supporting their existence and promoting them to live among us.  If we understand their behavior and act accordingly, they pose no threat to us or our dogs.  Science has shown our ecosystem and society are healthier with striped skunks around, so give them a break.  They can be good neighbors.
~Jeremy 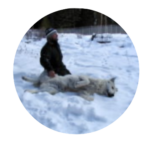 Throughout his career, Jeremy has encountered many wild striped and spotted skunks up close, sometimes within arm’s reach, yet has never been sprayed.  Nor were any member of the Sawtooth or Owyhee Packs ever targeted.  Understanding and reacting to their behavior is key to happy coexistence.