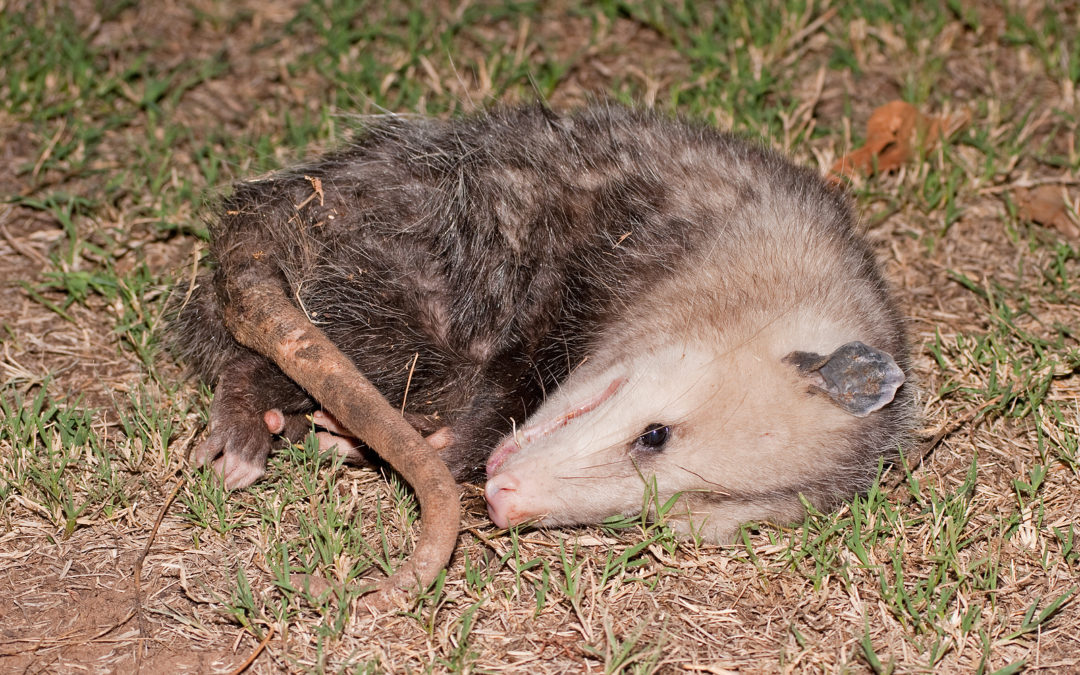 Although the highly recognizable Virginia opossum, also known as North American opossum, commonly lives around human settlements, this unique North American marsupial remains quite misunderstood.  Typically portrayed in popular culture as being ugly, opossums have several physical traits that make them unlike any other North American mammal.  First, they are the only marsupial inhabiting the United States and Canada.  Their indicative coloration of white heads with pink noses and gray bodies makes them easily identified, however, their most remarkable anatomy is their long, naked, prehensile tail.  Although their unusual tail sometimes gets them misidentified as huge rats, opossums are not related to rodents and use their muscular tail to grip branches when climbing trees.

Virginia opossums exhibit a great variation in physical size according to where they live.  Ranging from one to three feet in body length, plus a tail measuring 9-19 inches, opossums can weigh anywhere between 1-14 pounds.  On average, males are larger and heavier than females and data show the largest opossums live in the North, where the smallest exist in the tropics.  This body size difference can be so exaggerated that a male in Canada could weigh twenty times heavier than a female in Mexico, making them one of the most variably sized animals in the world.  They are perfect examples of how larger body sizes assist in colder climate survival; a theory known as biogeography.

Additional unique characteristics of the Virginia opossum include an opposable thumb located on their hind legs used for grasping limbs when climbing.  Therefore, opossums are occasionally seen hanging upside down, the dexterity of their hind paws and prehensile tail allows stable grip in this position.  When on the ground opossums perform a pacing gait, meaning they move both front and hind legs on the same side at the same time, creating a waddle-like walk.  They have a whopping fifty teeth in their mouth, which is more than any other land mammal in North America! 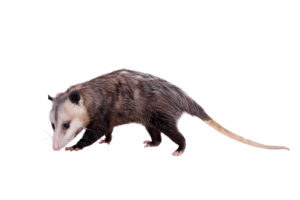 Although originally from South America, opossums have blended well and become an important mesocarnivore in North America.

All opossums in the Western Hemisphere originated in South America, then several species ventured North when the Panama isthmus land bridge joined North and South America.  Virginia opossum is the most successful South American native to invade the North, now being common in Mexico, most of the United States, and along the southern boundary of Canada. The ability to adapt to colder environments has made the Virginia opossum the most northern marsupial in the world.

As opossums migrated North, they did not cross the Rocky Mountains, so all lands East of the Rockies became suitable opossum habitats.  Virginia opossums are more numerous in the Southeastern US but span up the Eastern seaboard as far north as Ontario, Canada.  During the Great Depression, opossums were intentionally released in California to provide a food source for destitute folks.  They quickly expanded to occupy the entire Pacific coast from Mexico to Southern Canada.  All North American populations are continuously expanding Northward, presumably due to climate warming.

Virginia opossums have a long breeding season, beginning in December and lasting until the following October.  Males venture outside their normal territory making a clicking sound to attract eligible females, who may produce up to three litters each season.  After a short twelve-day gestation, around eight young are usually born per litter.  At only a half-inch in size, the blind, deaf, relatively helpless offspring crawl to their mother’s marsupial pouch where they nurse and remain protected for the next 2 ½ months.  After leaving the pouch, the young cling to their mother’s back as she carries them for another four months while they learn survival skills.

The life of an opossum is short-lived.  First, only one in ten newborns survive until adulthood, then their adult average lifespan is only two years.  Their lack of predator defense is the leading theory on why they only live a couple of years in the wild. 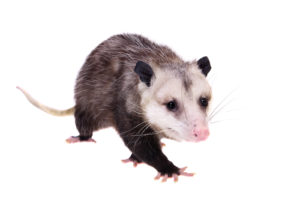 Opossums are able to memorize food source locations and have an intellect that exceeds most dogs.

Opossums are omnivorous; however, they tend to be mostly insectivores who prefer grasshoppers, beetles, and crickets.  When not catching insects, they also consume small mammals such as mice, voles, rats, and occasionally young rabbits.  Being an opportunist, opossums will eat eggs, fish, or scavenge on roadkill when available.  They can sometimes raid human trash receptacles or bird feeders in search of food as well.  During summer and fall, opossums eat berries, fruit, nuts, and vegetables to supplement their nutrition.

Virginia opossums have developed an immunity to snake venom, so they hunt snakes and other reptiles as part of their diet.  Interestingly, they have also acquired a taste for ticks and will eat every one they come across.  Some studies show opossums may consume up to 5,000 ticks per season!

In addition to being an important consumer, Virginia opossums also provide a food source for many predators including bobcats, coyotes, cougar, fisher, owls, and hawks.

Opossums are nocturnal, so they spend every night roaming about in search of food.  During the day they take refuge hanging in tree canopies or borrow space in a burrow dug by another animal.  They are solitary until brief meetings to mate during the breeding season.  Although opossums do not hibernate, they decrease their activity during winter and may remain nestled in a burrow to wait out a cold spell for days.  Their thin fur and short legs are disadvantages through Northern winters and even make them susceptible to frostbite.

When confronted by a threat, opossums have a unique tactic of dissuading attackers by acting dead.  This famous method of “playing possum” often convinces would-be predators that they previously died and are now a rotting corpse, which prevents most from eating the otherwise hapless opossum.  The process of feigning death is more physiological than behavior, where stress initiates a reaction to make the opossum lose consciousness, slow their heart and breathing rates to almost undetectable amounts, stiffen their joints, and produce a foul-smelling odor from glands in their rectum.  The reaction lasts as long as the threat is nearby, sometimes for hours at a time.

Virginia opossums have adapted well to living around humans, therefore are often seen living in urban and suburban areas.  Due to their nocturnal nature, they can quietly live close by or even under houses during the day, then profit from the human-provided food sources at night.  Opossums are known to raid gardens, bird feeders, outdoor pet food, and trash cans, however, these events can be prevented with some good possum-proofing techniques. 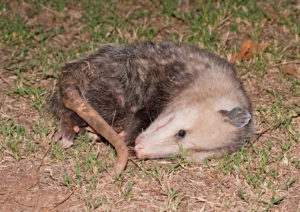 Otherwise defenseless against threats, opossums resort to tricking their predators into believing they are dead and unpalatable. This catatonic state is a surprisingly successful defense mechanism.

While our pets may pose a danger to them, opossums will never endanger our pets because their only defense mechanism is the ultimate in passivity–playing dead.  At first, an opossum may bare their teeth, hiss, and snap its jaw toward a threat, however, once the threat continues to move closer, the feigning death reaction occurs every time.

Furthermore, due to their low body temperature and metabolic rate, opossums are incredibly resistant to the rabies virus.  Occurrences of rabies-infected opossum are rare, making them a safe neighbor in our communities.

Although Virginia opossums may not be winning any beauty contests, they fill an important ecological niche in North America.  Despite migrating here from South America, they have not disrupted habitat or native species like many other invaders and now contribute to the natural food web.  The control of insects and rodents that opossums provide is invaluable to human society, even if we must tolerate an occasional scavenge of our trash.  Additionally, by devouring copious ticks, opossums limit the spread of tick-borne illnesses such as Lyme Disease, making our communities safer.  Overall, Virginia opossums are a safe and beneficial mesocarnivore that both improve our ecological and societal health, while remaining mostly out of sight and posing no danger to us or our pets.

Welcome to the continent, possums!

For further reading or to support opossums: