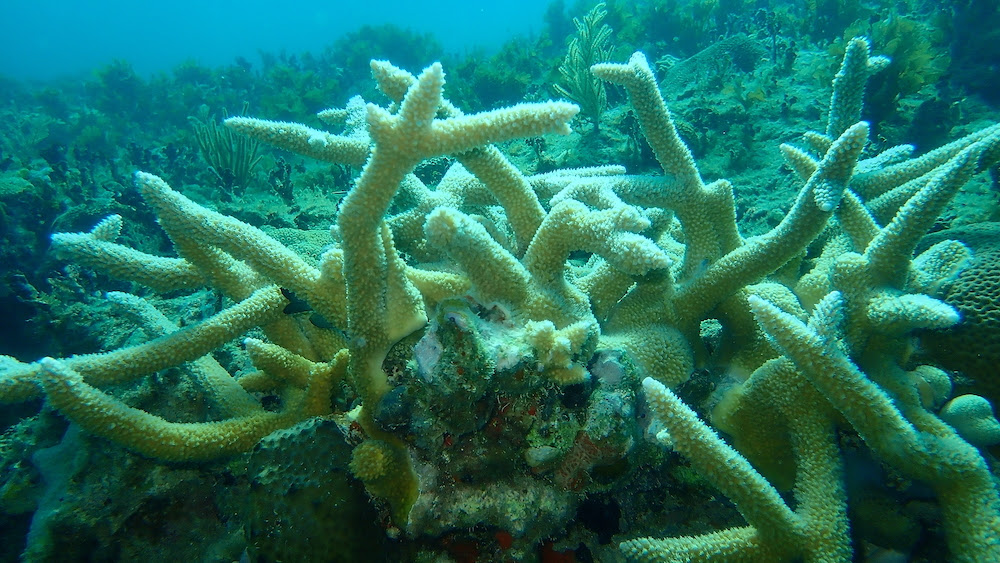 Coral reefs are extremely important to ocean ecosystems. Currently, there are many threats to coral reefs that can have consequences for the rest of the environment. One species of coral that’s vulnerable is Staghorn Coral.

Staghorn Coral can be found in shallow waters of tropical reefs, slopes, and lagoons. They come in a variety of colors, from dark gray to bright pink. They are carnivores and can grow into thickets that are 30 feet wide and 5 feet high.1 This coral, along with several other species, are what formed the Caribbean coral reef starting 5,000 years ago.2 Staghorn Coral is nocturnal. When night falls, it will unfurl its tentacles to catch zooplankton. These tentacles sting and capture their prey.1

These corals provide important habitats for other species that live in coral reefs. Yet they are particularly vulnerable to climate change. Coral has a relationship with algae, which gives them their color, but when temperatures rise, the corals end that relationship with the algae, causing the algae to leave and the coral to lose its color. This is known as bleaching.2 Although coral is still alive when it’s bleached, it’s more at risk of stress, disease, and death. Staghorn Coral is especially vulnerable to bleaching and the consequences that follow it. They can’t recover as quickly as other species.1

According to the IUCN, Staghorn Coral is listed as near threatened.1 Some efforts are being made to help these corals recover. For example, it’s often found in regions that already have protections on them, and scientists continue to study the coral to find causes of death as well as breed the coral and then move it back into the wild to re-establish its presence in a specific area.1&2

Sometimes it can be easy to overlook which species are integral to an ecosystem. But every species plays its role and when we protect our environment, we build and sustain ecosystems that function efficiently and effectively.