What do a mountain lion, panther, and puma all have in common? 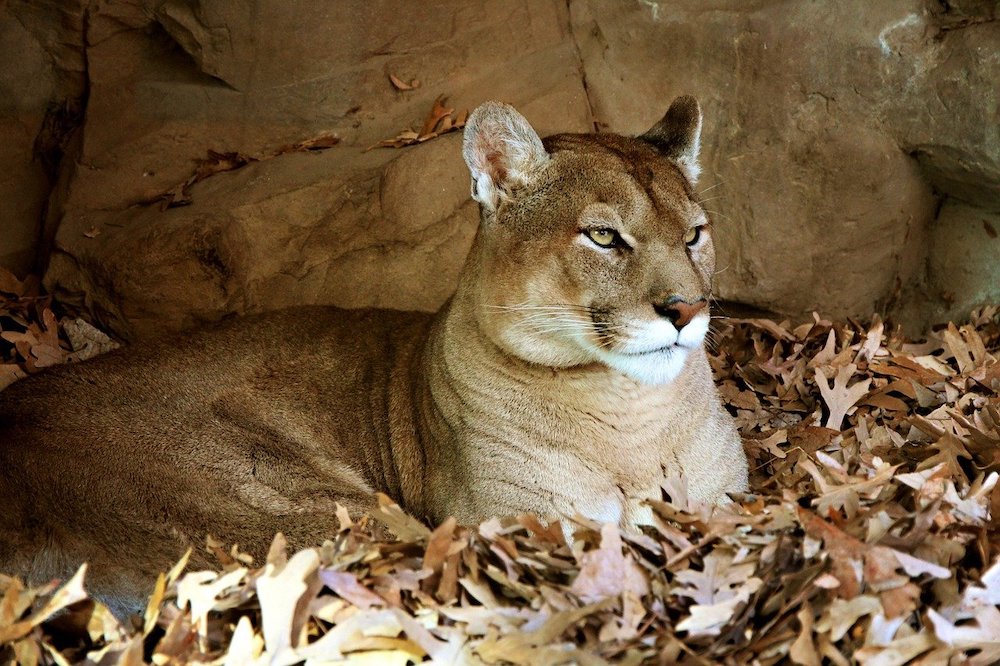 Mountain lions are also known as panthers, pumas, cougars, or catamounts. They are large cats that are native to the Americas. These cats have beige fur with some black markings on the tails, ears, and snout.1

Their historic range used to encompass the entire United States, but now they’re found mostly in western states, while Florida has a very small, critically endangered population.1&2 Problems arose in the 19th and 20th centuries between humans and cougars because of their threats to livestock. As a result, they were almost completely killed off in the Eastern part of the United States.1&3

Where do Mountain Lions Live?

Mountain lions are very adaptable and can be found in a variety of habitats, like in the mountains, forests, or even deserts.1 They can live in areas as low as sea level to as high as 10,000 feet, as long as these places have good cover for them.2&4 These cats are very territorial and so they need a lot of space to live. In fact, they need 40 times more space than bobcats do.1

What Do Mountain Lions Eat?

They are carnivores, so they eat other animals. Their prey of choice is usually deer, but they’ll also take down coyotes, raccoons, elk, and porcupines.2 They’ll start hunting around dusk. They’ll stalk their prey before going in for the kill – usually, they target the spinal cord first.1 They hunt about once a week.2

Some people worry about being attacked by a mountain lion, but the probability is extremely low.2 They are shy animals that usually avoid humans.3 Precautions must be taken though when in their territory, such as staying in groups and avoiding hiking during their hunting hours.4

Overall, mountain lions are considered of “Least Concern”, with a decreasing population trend, according to the IUCN.3 This is due to conservation efforts put in place after their numbers significantly dropped in the 20th century. So although they may be considered stable, their numbers are much lower than they used to be.1 Today, they still face threats from habitat destruction, collisions with cars, and trophy hunting.2

Mountain lions are a keystone species, just like wolves. They are able to control their own population size, force deer to move around and not overgraze, stop erosion on riverbanks, and overall keep a healthier and more sustainable ecosystem.2

They’re also considered an “umbrella species”, because of how much territory they need to survive. When that territory is protected for them, it also provides protection for all the other organisms living there, too. So it benefits more than just these big cats.1